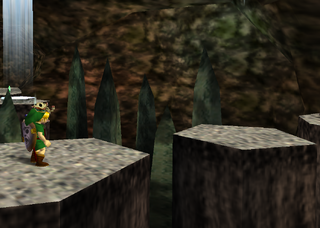 Beneath the Graveyard is a location in Majora's Mask.[1]

Ikana Graveyard is a burial ground for those loyal to the Kingdom of Ikana. The graves are tended to by Dampé, who is afraid of the undead. Stalchildren wander around at night, keeping watch over the graveyard. In life, they were the loyal soldiers of Ikana's army, yet they continue to follow Captain Keeta's orders even in death.

Each night, the Stalchildren patrol a grave, as per the orders of Captain Keeta. If Link speaks to these skeletal soldiers while wearing the Captain's Hat, they mistake him for the captain and ask him if they should open the grave.[2] The Stalchildren are the only ones who can open the graves and reveal the caverns beneath them.

Night of the First Day

The grave being patrolled on the night of the First Day is the only one crucial to Link's quest. After falling into the grave, Link lands on a large stone pillar protruding from a deep chasm below. At the edge of the area is an arched doorway with bat-like engravings on all sides. It leads into a gloomy chamber swarming with Bad Bats. Once they are defeated, a Treasure Chest appears containing a Purple Rupee. However, Link can only lift the bars over the next door by lighting all the torches in the room.

The next area is a dimly-lit chamber with strange markings on the walls and floor, as well as a stage hidden behind a curtain parallel to the entrance. Standing lifelessly in the center of the room is an Iron Knuckle. Upon being disturbed, it comes to life and attacks. Link must defeat the armored foe to release the imprisoned soul of Flat, one of the Composer Brothers. Flat reveals that his cursed brother Sharp was the one who sealed him beneath the graveyard. He asks Link to cleanse his brother's soul using the "Song of Storms," a special tune he composed to summon up stormy skies and rain.[3]

Night of the Second Day

The Stalchildren guard a different grave on the night of the Second Day. Asking them to open it reveals another way into the nether regions of the graveyard. Upon entering, Link will be within the same room as the one he had found himself in on the night of the First Day, but in a different section. A passageway in the corner of the room is hidden behind a fake wall, and can only be seen using the Lens of Truth. Through the seemingly concealed location, there is a door with intricate designs imprinted on the casings leading into an entirely different segment of the underground region.

The Lens of Truth remains important in the next room, as it contains several invisible enemies and a hidden bridge which forms a pathway over a bottomless pit. Beyond is a small corridor, and to the left side is a wall that must be bombed in order to reveal yet another doorway.

The final room of the grave is an eerie hexagonal grotto with mounds of skulls at every corner and blood streaming down the walls. In the center of room is another Iron Knuckle. Upon its defeat, a Treasue Chest containing a Piece of Heart appears.

Night of the Final Day

The grave opened by the Stalchildren on the night of the Final Day leads to a new location separate from the ones seen prior. Link encounters Dampé the gravekeeper wandering inside, searching for the Royal Family's treasure. However, his torch has gone out, and he asks Link to guide him using Tatl's light.[4]

The expedition consists of guiding Dampé around the room to several different mounds of dirt, whereupon he asks Link whether he ought to dig in the designated spot. Most of the mounds contain nothing; however, three of them reveal blue flames upon digging into them. Initially, Dampé dismisses these as being irrelevant and the two continue on with their search.

After all three blue flames have been uncovered, they merge to reveal a Big Poe. Dampé flees to his bedroom in terror, leaving Link to battle the ghost alone. Once it has been defeated, a Treasure Chest appears containing an empty Bottle. In Majora's Mask 3D, the Bottle is replaced with another Piece of Heart. The gravekeeper can be found afterwards hiding under his bed upstairs, stricken with fear.