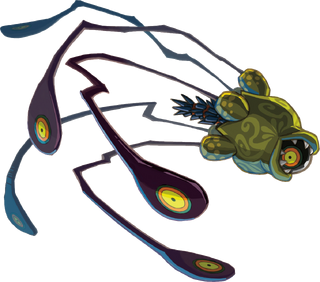 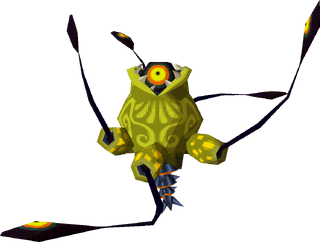 Bellum is the primary antagonist of Phantom Hourglass, and serves as the Final Boss.[3]

Bellum is a large, squid-like,[4] malevolent creature adorned with dark eyes; the main eyeball exists in the mouth cavity, and each tentacle sports one small eye as well. Until the conclusion of the fourth dungeon, Link and Linebeck are unaware of his existence. However, once a petrified Tetra is found, Oshus, revealed to be the Ocean King himself, appears to tell the two about what happened to her. Many years ago, Bellum appeared and began to consume people's Life Force, an energy which every living thing in the world possesses. Bellum attacked Oshus, who naturally fought back.[2] However, his attacks were futile, and he was subsequently locked away at the bottom of the Temple of the Ocean King, his Life Force at the mercy of his nemesis.[5][2] Bellum then formulated the Sands of Hours, a crystallized version of Oshus' Life Force, to create monsters that attempted to seal away the Fairies of Power, Wisdom, and Courage.[6][7] He also created the Ghost Ship to spread rumors of a great treasure within it to lure people there and thus obtain further Life Force.[8]

Bellum was obsessed with obtaining Life Force, so he was attracted to Tetra because of the great amount of Force within her.[9][10][11] The Phantoms, found within the Temple of the Ocean King, are his minions, powerful and nigh-invincible like him. [12]

Oshus reveals that the only way to slay Bellum is with the legendary Phantom Sword, a sword which only the blacksmith Zauz knows how to forge.[13] After many struggles, Link obtains the Crimsonine Steel, the Azurine Steel, and the Aquanine Steel needed to forge the Phantom Sword.[14] He then finally penetrates the inner sanctums of the Temple of the Ocean King, where Bellum dwells, and uses the power of the Phantom Sword, the Phantom Hourglass, and the Ciela-made Phantom Spheres to temporarily defeat it.[15] However, Bellum soon takes a revived Tetra and takes control of the Ghost Ship, attempting to escape with her. With the combined efforts of both Link and Linebeck, however, the Ghost Ship is destroyed. Bellum, still relentless, causes a large piece of the Ghost Ship to crash into the boat. Oshus, who was still on it, is seemingly killed, and Bellum uses this as an opportunity to grab Link. Linebeck, however, manages to free him using the Phantom Blade, but is soon taken by Bellum instead.

In a last-ditch effort to defeat Link, Bellum takes control of Linebeck,[16][17] transforming him into an immense Phantom, Bellumbeck.[18][19] He then attacks Link, whose attacks are initially useless against Bellumbeck, even with the Phantom Hourglass. Ciela, however, hovers behind Bellumbeck, allowing Link to know when Bellumbeck's weak point, his eye, is open.[20] Bellumbeck uses one of his tentacles to trap Ciela, though, and continues fighting Link. Link manages to loosen Bellumbeck's grip on Ciela several times throughout the battle, giving him Phantom Spheres to freeze time once Bellumbeck's eye is open. After a long and difficult battle, Linebeck is freed from Bellum's clutches, and the beast turns to the last of the Sand of Hours. Link absorbs it with the Phantom Sword, and Bellum is defeated.

It is possible to defeat Bellum with only having to freeze time twice, however, for this to be performed, Link must have collected all of the Spirit of Power's spirit gems and have completely upgraded himself with such. Link also must have obtained the Great Spin attack. When Link freezes time, he must use the Great Spin attack on Bellum's eye, while the Spirit of Power is equipped.

It is also possible to stop Bellum's spin attack, if Link performs one himself. If done correctly, the sword clangs against Bellum's, without having to hit him at all.

"Bellum" is the Latin word for war.