Not to be confused with Sea Lily's Bell.

The Bell is a recurring Item in The Legend of Zelda series.[1]

The Bell is a gift from Irene. Shortly after Yuga begins his attack on Hyrule Castle, Irene spots Link walking about Hyrule as she flies overhead on her broom. She explains that the Fortune-Teller told her to "take care of green" in order to avoid meeting disaster, and that she believes Link to be said "green".[2] Once Link is given the Bell, a new button for ringing it at any time appears permanently on the bottom screen.

The Bell is used to summon Irene in order to transport Link to any Weather Vane that has been activated within the world he currently inhabits. After Irene is kidnapped by Yuga and later awakens as a Sage, ringing the Bell will only summon her broom. The Bell has no effect when used indoors.

Link can warp to any of the following locations using the Bell:

In The Faces of Evil, the Bell is an item that can be rung to stop flying enemies for a short period of time, for about eight seconds. It costs 5 Rubies per use. It is obtained in the Goronu area after defeating Goronu. 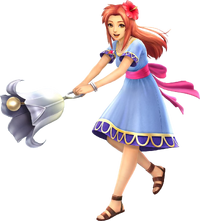 The default Bell is the Sea Lily Bell, which is named after and resembles artwork of the Sea Lily's Bell from Link's Awakening. The second form of the Bell is the Wavelet Bell, followed by the Awakening Bell.

Against commander enemies, Marin swings the Bell to splash big gushes of water to her sides; one to her right, one to her left, and then one straight up at her enemies. Against Giant Bosses, Marin swings her Bell onto the boss before jumping over and riding the Wind Fish as it flies in and rams itself at the Giant Boss.

Upon activation, Marin swings her Bell once and then closes her eyes as she holds a fish to her chest, building the energy within her before jumping with a fist-pump in the air. When deactivating, Marin happily twirls around and starts to hover from the ground while singing the "Ballad of the Wind Fish". A Magic Circle then appears beneath her enemies in front of her as a music note in a bubble starts drawing in nearby enemies. She then ends her song, causing the bubble to burst. Upon depletion, Marin swings the Bell in the air before making one big swing that sends a huge water bubble into the air, which then comes crashing down as a burst of water against her enemies. The impact knocks Marin down in surprise.