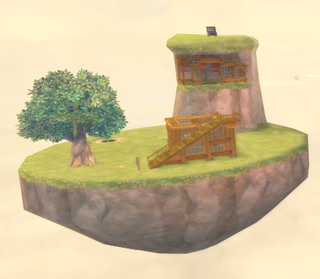 Beedle's Island is a location in Skyward Sword.[1]

Beedle on his island at night

Beedle's Island is a small island in The Sky northeast of Skyloft and home of Beedle, who can be found on the island during the night. It harbors a large wooden structure on which the Beedle's Airshop sits during the night, a storage area, a campfire, and a tree. There are also two Goddess Cube Chests on the island.

Beedle's Island can be reached by Loftwing during the day. Unfortunately, Link is unable to interact with Beedle, who will be selling his wares to the inhabitants of Skyloft. However, falling asleep in the bed inside his ship will allow the young hero to access the island during the night. At night, Beedle will sit and talk with Link whilst admiring his Horned Colossus Beetle, which is caged in his lap.

Near the end of the game, Beedle's Horned Colossus Beetle will be gone missing. After Link retrieves it from Strich on Bug Rock, he can return it to Beedle in his island at night, receiving five Gratitude Crystals in exchange.