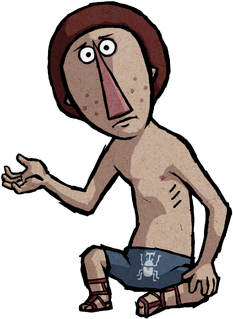 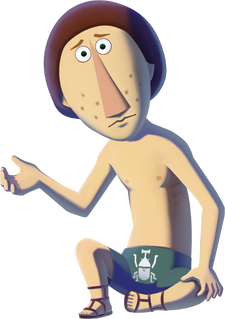 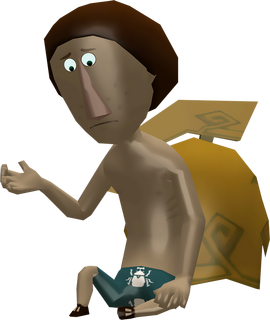 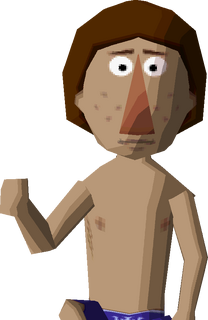 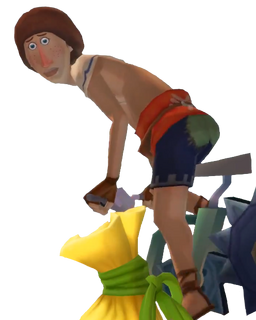 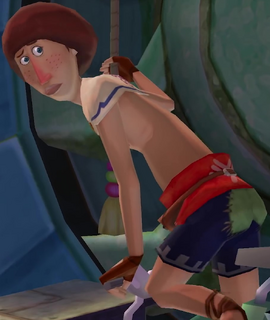 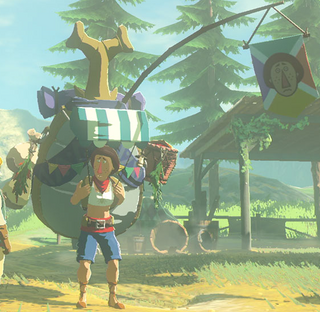 Beedle is a recurring character in The Legend of Zelda series.[3] He is a small-time businessman, seen working operating his various Markets. Like other Shops and Business Scrubs, Beedle sells, and sometimes even buys back, quest-specific items, such as All-Purpose Bait and Picolyte, both of which are not plot-required, but add extra interest to the games.[4][5] Unlike the other entrepreneurial businesses in The Legend of Zelda series, Beedle incorporates memberships into his line of work, rewarding Link with increased price discounts if he becomes a frequent, repeat customer.[6]

In The Wind Waker, Beedle is a local sea merchant who travels the Great Sea in search of profit.[7] Although his sales pitch is unmatched,[8] he unfortunately never seems to get any luck. His dangerous travels accommodate the perceptibility of his business, so there is certainly some point in Link's quest that he will come across this merchant. He sells a wide range of products, from Arrows and Bombs to Bait for Fish and Hyoi Pears.[9] As Link progresses and acquires different Items, Beedle will provide him with the necessary ammunition to replenish that certain Item. His products are of important significance, such as the Bait Bag,[10] which can purchased at the very beginning, and allows Link to collect various types of Bait. His appearance and attitude may shock some, but he is a generous person who will give his customers affordable prices compared to other shops. Beedle often sends Link things through the mail system used throughout the Great Sea, including his very own Beedle's Chart to help Link locate Beedle.[11]

Beedle dreams of opening a chain of trading posts where people can buy, sell, or trade anything.[8] He currently owns and operates many Shop Ships across the Great Sea, and he will gladly buy anything Link happens to have in his Spoils Bag. He entices his customers with Silver and Gold Memberships in order to guarantee that they stay regular patrons.[6] One of the rewards for these memberships is the Complimentary ID.[9] When used, Beedle merely compliments Link, although most of his other rewards are useful.[12] Beedle's favorite things are bugs, especially beetles.[8]

At the Rock Spire Shop Ship, Beedle assumes an alternate identity as his own assistant manager.[13] When Link first visits the shop, Beedle's Assistant asserts that they've never met before.[14] He refuses to buy Spoils and denies being Beedle,[15] despite the fact that he appears on Beedle's Chart. Beedle's Assistant sells rarer, more expensive items: Empty Bottles, a Piece of Heart, and a Treasure Chart leading to another Piece of Heart.[9]

Beedle first appears in Hyrule Town during the Picori Festival in The Minish Cap, selling fruits.[16]

After Princess Zelda is turned to stone and Link obtains the Earth Element from Deepwood Shrine, he returns to Hyrule Town. In Hyrule Town Square, he can use the Gust Jar to clear off the dust covering one of the stalls;[17] if Link does this, after he obtains the Fire Element from the Cave of Flames, Beedle will set up his shop in the stall.

Beedle sells Picolyte,[18] and his available selection will expand as Link brings different liquids to the Forest Picori Inside the Barrel House of Minish Village. Beedle's initial selection includes Green, Red, and White Picolyte, and has three empty bottles to hold more.[19]

In Phantom Hourglass, Beedle operates Beedle's Shop Ship as in The Wind Waker, except that he has only one ship that appears in random locations in the World of the Ocean King. From 10am to noon on weekends and 10pm to midnight on weekdays (according to the Nintendo DS clock), the Masked Ship appears instead, manned by his alter ego Beedle's Assistant.[20] Beedle sells a Bomb Bag and a Wisdom Gem. Beedle's Assistant sells a Piece of Heart and a Courage Gem. Both sell Potions, Ship Parts, and Treasure. Their ships are unaffected by cyclones.

Along with Link, Tetra and Salvatore, as well as Tetra's Pirate Crew to some extent, Beedle is one of the few characters from The Wind Waker to actually reappear in Phantom Hourglass.

In Spirit Tracks, Beedle runs Beedle's Air Shop. Link can see his balloon flying around the Overworld prior to actually being able to enter it. At a certain point, Link receives a Letter stating that his Store just opened.[24] Link can get Beedle's attention from then on by blowing the Spirit Train's Whistle when he is nearby.[24] He will land by, allowing Link to stop by it like any other Station. Link can get Beedle's Membership Cards, allowing him to save up a point for every ten Rupees spent. Link can earn rewards after passing certain point milestones.[25] Saving up 500 points rewards Link with the Heart Container sitting at the back of the Store.

Beedle appears again in Skyward Sword, this time selling wares in a flying house, Beedle's Airshop. He operates this ship by pedaling a bicycle which powers an electric generator that drives some gears.[26] He sells Medals, additional Wallets, and his most valuable item, a Piece of Heart. Asking Beedle about his Piece of Heart before buying it will yield the response that he does not actually know what it is, and picked it up from somewhere nearby and decided to sell it.[27] Should Link look at something of Beedle's and attempt to leave without purchasing anything, Beedle will rant at Link about how much effort he needs to exert to hold Link's weight and decides to punish him by activating a trap door under his feet.[28]

During the night, Beedle and his ship retire to an island in the sky called Beedle's Island. Falling asleep in his ship will allow Link to visit the shopkeeper on his island during the night, and if the young hero falls asleep in his ship during the night, it will return him to Skyloft.[29] While resting on his island, Beedle will sit and talk with Link whilst admiring the Horned Colossus Beetle caged in his lap.[30] Here, his diction makes a dramatic change with an above average vocabulary and without the joyful yells he is known for. Link can ask about his altered demeanor, but Beedle does not appear to notice any difference, and will dismiss the question as unimportant.[31]

After Strich settles in the Bug Rock, Beedle will inform Link that his Horned Colossus Beetle has gone missing and asks the young hero to help him look for his prized possession.[32] If Link flies to Bug Rock, he will find out that Strich has discovered a Horned Colossus Beetle.[33] Upon learning that the Bug belongs to Beedle,[34] he states that he will only let Link have the legendary bug after he plays Bug Heaven,[35] which requires the young hero to catch 10 Bugs in under 3 minutes.[36] If Link succeeds, he will obtain the rare beetle from Strich,[37] and can return the Horned Colossus Beetle to Beedle to receive 5 Gratitude Crystals. As an additional reward, the shopkeeper allows the hero to buy any item from his Airshop at half price.[38]

In Breath of the Wild, Beedle can be found walking around Hyrule,[39] mostly close to Stables. He travels Hyrule on foot instead of by boat or airship like in previous titles. His backpack is shaped like a Beetle, which customers can remember him by.[40] Beedle stocks items such as Arrows and Materials, claiming to carry many "special Bugs."[41] He also offers to buy things from Link, mentioning that gemstones are valuable for earning rupees.[42]

If Link speaks to Beedle with a beetle in his inventory, Beedle will ask for it in exchange for a random Food or Elixir.[43][44] His favorite is the Energetic Rhino Beetle, which he says is rare.[45] If Link denies his request, he claims his deal was good and the beetle wants to be with him.[46] He mutters to himself that he'll sneak into Link's inventory and replace it with a regular beetle, but quickly decides to hire someone else to do it.[47] He's surprised to see Link is still there.[48]

Beedle is a Master Spirit who owns and operates Beedle's Tent in Super Smash Bros. Ultimate. Beedle will excitedly greet anyone who enters his Tent,[49] praising anyone who purchases from him.[50] If all of Beedle's stock is purchased, he will announce that he is going to retrieve new wares.[51]

Beedle makes a minor cameo on a sign near the village in the Hyrule Circuit track with the sign having Hylian on it that translates to “Item Shop”.

Beedle is a merchant who hid himself away in order to protect himself from the sudden influx of monsters in Kingdom of Hyrule.[52] He wants to make a profit off the Diamonds that monsters drop, selling Weapons and other equipment to adventurers in exchange for Diamonds in the hopes of cashing in on them.[53] The location of his shops are random, but there will always be two hidden throughout the land either in the Grassland, Cliffs, or Desert biomes. His shops are always hidden in caves behind mounds of dirt, which must be dug away by a Shovel or blown up with an explosive. The goods that he sells are also randomized but he will always sell an Bottle in each shop for four Diamonds.[note 1] Once his goods are bought, they will never restock.

Beedle's name may come from his love of beetles, demonstrated both in The Wind Waker and Skyward Sword.[8] Supporting this, in Breath of the Wild, he has a beetle-shaped backpack.