Zelda Wiki
Register
Don't have an account?
Sign In
Advertisement
in: Enemies, Arthropod Enemies, Common Enemies and Traps,
and 16 more

This article is about the recurring Enemy in The Legend of Zelda series. For similar subjects, see Bee (Disambiguation). 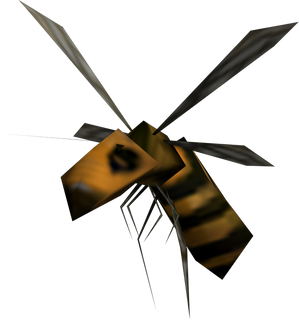 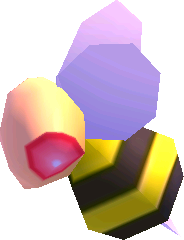 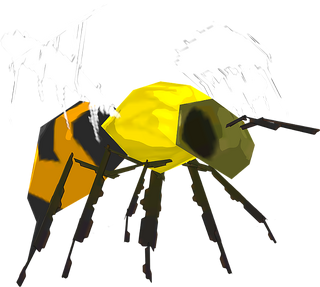 Sword
Bug Net
Bees,[1] also known as Hornets,[citation needed] are recurring enemies and Bugs in the The Legend of Zelda series.

They are usually hidden in trees and occasionally grass, and emerge when Link disturbs their territory, but they are easily defeated with almost any weapon.

Bees appear from cut grass and will attack Link once they appear in A Link to the Past. They can be caught using the Bug Catching Net and kept in an empty Bottle. The Bee can then be unleashed to attack nearby enemies and deal a small amount of damage, but every boss except Mothula is immune to it. There is also a variation called the Good Bee, which stays by Link's side for longer. Link can sell it in Kakariko Village for 100 Rupees. In the Game Boy Advance version of A Link to the Past, the Good Bee is called the Golden Bee. Link can bring one to the extra shop in the Village of Outcasts, after which it will start to sell it for 88 Rupees. The Fairy and normal Bee in the same shop are purchasable by default.

Bees make a brief appearance in one of the trees in Ukuku Prairie in Link's Awakening. They swarm around the Honeycomb, which is part of the Trading Quest. When Tarin knocks down the Bees' hive using the Stick, a swarm of angry Bees emerge and chase him away.

Bees can be found in the Lost Woods in Four Swords Adventures. A group of seven Bees will emerge from infested trees should the four Links approach them. After a three-second delay, the Bees will swarm over and damage the Links. The Sword is ineffective against them, but the Bees will gather around a thrown Bomb, probably attracted to the burning fuse, and will perish when it explodes. The Bees will also leave the screen if they manage to attack the Links five times successfully. There are no visible indicators as to which trees are infested.

In Twilight Princess, Bees appear as Hylian Hornets.[2] Hylian Hornets will attack Link to protect their Beehives and Bee Larva, which can be used for Fishing or to restore Link's Life Gauge. Hylian Hornets can be found at the Fishing Hole, Ordon Village, and within several Caves.

In Phantom Hourglass, Bees are found swarming around hives in a few places, such as Cannon Island. They will buzz around Link suspiciously if he gets close, or swarm around him and attack if he destroys their hive. They can be defeated using most weapons.

In Spirit Tracks, Bees are very similar to their appearance in Phantom Hourglass. They are harmless until Link disturbs their hive, which will anger them. Angry Bees will chase after Link, however, in this game they cannot be attacked. They will eventually break off their pursuit, or can be avoided entirely if Link enters a house or leaps into deep water.

In Skyward Sword, Deku Hornets appear. They can be found in Faron Woods, Deep Woods and at Bug Heaven. They will attack Link if he comes too close or if he attacks their nest. They can easily be caught by using the Bug Net. Link can obtain Hornet Larvae by destroying their hive. Link can sell Deku Hornets to Strich depending on the mood he is in.[3]

In A Link Between Worlds, Bees appear identically to their incarnation of A Link to the Past. They appear from cut grass and are at first hostile towards Link, but will become friendly to him and even attack his enemies once he obtains the Bee Badge. They can be kept in an empty Bottle with the use of the Bug Net, and be released again to attack nearby enemies. Golden Bees reappear as well, and are rarely found in grass. A Golden Bee must be given to the Bee Guy to receive the Bee Badge.

In Breath of the Wild, Courser Bees attack anyone who comes too close to their nest. Link can use this to his advantage in certain situations by stealthily shooting an arrow at a beehive from a distance, causing the disturbed bees to attack and distract his enemies. Their nest contains Courser Bee Honey, which Link can obtain by using a Torch to smoke the Bees out, causing them to depart peacefully. However, he must be careful not to burn the hive itself, as it will disintegrate. He may also obtain it by fighting off the Bees with a Weapon. They will take three hits before giving up and leaving. Courser Bee Honey is used in many sweet recipes, such as Honeyed Fruits and Honey Crepes.

Bees appear as enemies in Cadence of Hyrule, where they appear after knocking down a beehive, destroying it, or by cutting down bushes.[4] Once they appear, they move to the beat of music at random, and can fly in any given direction, including diagonally. They can be caught in a Bottle and used to assist Cadence, Link, Yves, and Zelda in battle.[5][6] Alternatively, Link can use the Ice Rod to turn the bee into an ice block in order to solve puzzles or deal extra damage to enemies by slamming the ice block into them.

Upon releasing a Bee from an Bottle, they will sport five Hearts and will lose one heart for each time they sting an enemy. Additionally, they can also suffer damage and even die from enemy projectiles and attacks, so caution must be taken on when and where to release them. However, recapturing them in a Bottle will heal the Bee to full health.

While following a path to Eddo's Garage, Link sees a sign that says "This tree is lucky."[7] Ciela suggests the tree might grow honey,[8] so Link kicks the trunk.[9] A beehive falls from the tree, causing the Bees to swarm and attack Link.[10] Ciela tells Link to run into the nearby cave.[11] As the Bees repeatedly sting him and his face begins to swell, Link says too many stings may cause him to die.[12] Eddo himself appears and sprays the Bees with bug spray.