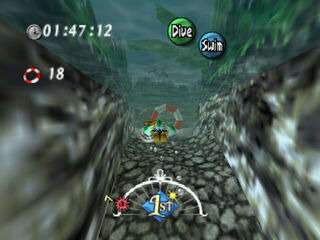 Waterfall Rapids
The Beaver Race is a Mini-Game in Majora's Mask.[1] It remained unnamed until Majora's Mask 3D.

The Beaver Race is located in the Waterfall Rapids in Zora Cape. Once there, Zora Link must talk to the Little Brother Beaver swimming around in the water. He then challenges Link to compete against him, which leads to the first of two Races.