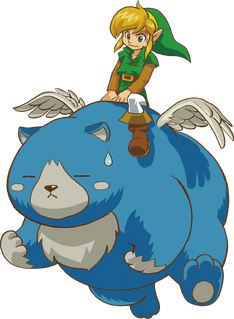 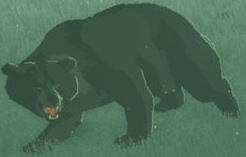 Bears are reccurring Animals in The Legend of Zelda series.[1]

In Link's Awakening, the Chef Bear lives in the Animal Village, where she operates a small cafeteria. The Chef Bear laments that she has no Honeycombs for a dish she is preparing,[2] which Link can give in exchange for the Pineapple as part of the game's Trading Quest. In doing so, the Chef Bear also gives advice in waking the Walrus south of the village.[3]

When Marin visits the Animal Village to sing for the animals, a blue Bear can be found listening to her song.

Moosh is a winged Bear that appears in Oracle of Seasons. He appears several times to aid Link on his quest, and can potentially become one of his animal companions by obtaining his Moosh's Flute.

A red Bear is one of the animals found listening to Nayru's song at the beginning of Oracle of Ages, entranced by her singing. It moves aside for Link after speaking with everyone so that he can sit and listen.[4] The Bear and all of the other listeners are then scared away when Veran reveals herself. After Link saves the Maku Tree in the past and returns to the present, the red Bear can be found again in the same grove in the Forest of Time, lamenting that there are no more songs.[citation needed] The red Bear also reappears in the game's post-ending, listening to Nayru's singing.

In Breath of the Wild, Honeyvore Bears and Grizzlemaw Bears appear as wild animals. They will generally ignore and avoid Link, but may attack if provoked. It is possible for Link to mount Bears and ride them. However, they cannot be registered at Stables.

A single large bear is at the front of the animal mob that forbids Link and Impa's entry deeper into the forest.[5] The Bear and other animals allow Impa and Link to pass after realizing the hero is a Hylian of the old blood.[6]

Bears in The Legend of Zelda series
Community content is available under GNU Free Documentation License unless otherwise noted.
Advertisement