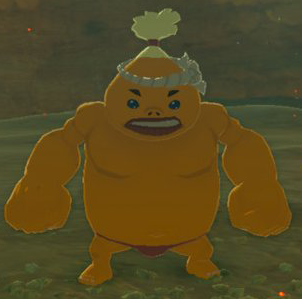 Bayge is a character in Breath of the Wild.[4]

Bayge is the eldest of the Goron Blood Brothers,[1] a group consisting of himself and his brothers, Heehl and Kabetta. Bayge and his brothers are passionate about training in difficult feats of strength and endurance. He lives with his brothers in a house in southern Goron City, which is now abandoned and left with a Sign saying they have gone to Gut Check Rock to train.[5]

Bayge is involved in two Shrine Quests. One is the "Test of Will" at Mount Nabooru in the Gerudo Highlands. Bayge and the other Goron Blood Brothers have traveled to their ancestral training ground to train themselves to withstand the rising heat of Goron City.[6][7] Bayge and the others challenge Link to join them by sitting in a ring of fire to see who can withstand the longest.[8][9][10] When Link joins them in the ring, Bayge will start the contest of endurance.[11] Though Bayge claims that it is easy, he is the last of the three to collapse.[12] Afterwards, he declares Link the winner.[13]

The brothers then challenge Link to a harder contest, which would require him to stand on an even hotter platform.[14][15] Bayge warns Link that he will catch on Fire if he looses his focus.[16] However, he also comments that clearing this challenge is said to reveal an Ancient Shrine.[17] During this challenge, Bayge will notice if Link is wearing Armor from the Fireproof Armor, Gerudo Set, or Desert Voe Set, and he refuses to start until he takes them off.[18]

After enough time passes, Bayge will stop the contest to declare that Link has beaten it.[19] Once this is done, Joloo Nah Shrine will emerge from the ground nearby. Bayge praises Link for being able to overcome the challenge, and the Shrine Quest will be completed.[20]

Bayge is also involved in "The Gut Check Challenge" Shrine Quest at Gut Check Rock in northern Eldin Canyon. Bayge is found sitting on the steps to Gorae Torr Shrine atop tits pinnacle. He refuses to let Link approach, as the Shrine's platform is a sacred place to the Goron Blood Brothers.[21] However, Bayge decides to let Link through if he can clear their training exercise, the Gut Check Rock Challenge, wherein Link must climb the pinnacle while collecting enough Rupees.[22] Upon clearing the Challenge, Bayge happily appoints Link as an honorary Goron Blood Brother and allows him to approach the Shrine.[23] Bayge will then offer a much harder course called the Super Gut Check Challenge.[24]

When The Champions' Ballad DLC Pack is active and Link is pursuing the "EX Champion Daruk's Song" Main Quest, the Goron Blood Brothers can be found at Darb Pond. If Link has already completed "The Gut Check Challenge", Bayge recognizes him as their fourth brother.[25] He explains that Daruk used to train at this spot, and while he does not know why, he believes it was part of his training as a Champion.[26] Therefore, the Goron Blood Brothers are training at this spot to become mighty Gorons like Daruk, claiming it is their only path.[27]

Kabetta points out the Glowing Ring on the Lava and directs Link to stand on it.[28] Bayge points out that choosing this spot makes Daruk hard-core.[29] Due to the intensity of this training, he decides to take the time to strategize with the other Goron Blood Brothers.[30] If Link speaks to him after, Bayge says Daruk would howl while standing on Lava to sharpen his skills.[31]

Bayge notices when Link completes the training due to the Glowing Ring's disappearance.[32] He is disappointed that he can no longer attempt the training.[33] After this, the Goron Blood Brothers will return to Gut Check Rock.