Take redirects here. For the minigame in Spirit Tracks, see Take 'Em All On!.

Battle Mode,[1] also known as Multiplayer, is a recurring game mode in The Legend of Zelda series. The choice menu appears automatically from starting to play Phantom Hourglass. Battle Mode is played either in Tag Mode or Online Play. Online Play offers many choices concerning the opponent's skill level as well as the ability to play using Friend Codes. DS Download Play is also supported requiring only one gamepak and two DS systems. Results of a game played this way will not be saved.

Battle matches consist of 3 rounds. In each round, players will alternate between playing as Link to playing as a trio of Phantoms in one of the eight maps available.[2] The clock is set for a round to last 60 seconds. However, power-ups exist to lengthen or shorten the time remaining. A round ends when Link is struck by a Phantom's sword. The final round is skipped if the player whose turn is to be Link has the highest score. If Link has the lesser score, the match will end if he gets a higher score.

While playing as Link, the player must turn as many Force Gems into his or her color as possible. Each player has a colored zone. Throwing a Force Gem onto the colored tiles changes its color.

While playing as Phantoms, block Link's paths to Force Gems.

In addition to colored zones, there are 'Safe Zones'. These are the same safe zones used in Adventure Mode. Phantoms can not see Link while he is in them. Throwing a colored Force Gem into a safe zone will change it back to Yellow. 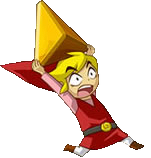 Phantoms cannot see Link while he is in a base or safe zone, but they can see the floating Force Gems. Only Link can move the force gems around. On the flip side; Link cannot see where any of the Phantoms are on the map unless a Force Gem is held up.

The color of Force gems do not denote value. At the beginning of a battle, all Force Gems will be golden. Player 1 will have a red tunic and red safe zones. Player 2 will be assigned blue. Tossing a Force Gem into the blue safe zone will change its color to blue, regardless of its previous color.

Tossing Force Gems into safe zones will turn them gold again. This will subtract points from the player whose color was lost.

There are three sizes:

By placing ship Parts or Treasure in Freedle's boxes, they can be swapped them with the opponent after the match is completed. This only works if both players have items in Freedle's box.

Big Plays are certain conditions that can be met during a match. Not all require a victory. Each time after getting 4 new Big Plays, Eddo's apprentice, Fuzo, on Cannon Island will have a new treasure chest as a prize -- always a Gold Ship Part. First, check the Postbox for a letter from Fuzo.

These appear in color orbs throughout the stage. A player's own power-ups will be their own color, and are obtained them by walking through the orb. Walking through the opponent's orb breaks it and denies them the opportunity to use it. Both players will be alerted when a power up is activated.