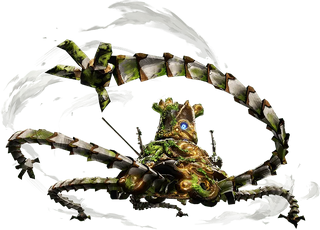 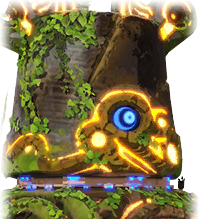 Powerhouse of the Past[1]

This Guardian was created to protect Hyrule in an age long forgotten. Its battle scars call to mind fierce conflicts against ancient enemies. It is theorized that this is a specialized model, as it is much more powerful than other Guardians.

Though similar in appearance to other Guardians, the Battle-tested model had avoided the Malice infection as the normally pink lights are a gold color. It is also covered in moss and numerous broken weapons to lend itself its apt moniker.

Unique to this model are additional tools such as a flight module that allows it to hover in the air as well as additional beam weapons such as homing bolts, a satellite weapon and a light reflection screen that can diffuse its energy attacks.

Similar to the Great Fairies and Calamity Ganon, the Battle-Tested Guardian is a large sized warrior, making it immune to flinching from normal attacks, though its large size means it will take a lot of hits. Its normal attacks consist of using its tentacles and tossing its weight around with its Strong Attack combos using its numerous beam weapons. Its unique Ability allows it to lock onto a single enemy with its targeting laser. After establishing a lock, its Strong Attacks will be enhanced and focused on the locked target. Its EX ability shortens the lock-on time. Like Calamity Ganon and Terrako, its weapon is Guardian cogs.