"My name is Batreaux, and I am a monster who resides here in this humble dwelling below Skyloft. But please allow me to correct one popular misconception. While I'm certainly a monster, I wouldn't dream of terrorizing the people of this town! You see, this adorable little girl is the only one who didn't let loose a blood-curdling scream at the sight of me!"
— Batreaux

Batreaux is a character from The Legend of Zelda: Skyward Sword. He is a friendly, bat-like demon residing in a shack below Skyloft, with a fondness for mortals.

At one point in the game, the child Kukiel is reported missing by her parents, Jakamar and Wryna. Link asks around Skyloft for clues, and eventually hears tales of the demon from Rusta at the Lumpy Pumpkin. Following the old man's advice, Link strikes one of the gravestones in Skyloft's graveyard at night, granting him access to Batreaux's House, from which Link hears a terrible scream emanate. Once inside, Batreaux is seemingly poised to strike Link, but once Link attempts to swing his sword at him, Batreaux begs him to stop and not harm him. Batreaux will also beg for him to stop if Link pulls out an item such as his Slingshot, Bow, Beetle, even his Bug-Catching Net.

Batreaux explains that he and Kukiel were merely playing a "scream-as-loud-as-you-can-game"; Kukiel is, in fact, the first person not to scream at the sight of him. He tells Link of his utmost desire, which is to become a mortal; to achieve this, he asks for Link to retrieve Gratitude Crystals, physical manifestations of people's happiness found throughout areas of The Sky. In return, he gives Link several useful items such as wallets, Rupees, a Piece of Heart, and a Cursed Medal, though he warns Link not to open the chest containing the latter.

If Link talks to Kukiel in Batreaux's House after agreeing to Batreaux's request, she will mention that she befriended Batreaux after he saved her life from almost falling off Skyloft.

After obtaining the Goddess White Sword, speaking to Batreaux will unlock the ability to dowse for Gratitude Crystals.

When Link has gathered 80 Gratitude Crystals, Batreaux is transformed into a mortal, though his new form turns out to be almost identical to how he looked as a demon. As a result of his transformation, the evil aura he used to emanate, which caused copious monsters to swarm the island at night, and Remlits to transform into vicious monsters, also disappears, making Skyloft safe at night again.

After becoming a mortal, Batreaux can be found inside the Bazaar during the day and on the bridge near Kukiel's House at night.

As many residents of Skyloft seem to be named after birds, it is possible that Batreaux may be named after the bat, although the bat is a mammal rather than a bird. Bats being the only mammals able to fly and Batreaux being the only demon in Skyloft, as well as Kukiel calling him "Uncle Bats," may support this theory.

It is unclear as to whether Batreaux turns into a Human or a Hylian. While he is non-demonic form is referred to as being human, it should be noted that during the Era of Skyloft, it was not uncommon for Hylians such as Link and Zelda to be referred to as humans. One possible indicator that Batreaux becomes a Hylian is that his human form has pointy ears; a notable Hylian trait. However it should be noted that his demon form also possessed pointy ears (trait often seen among demons as well) and his non-demonic form retains certain traits of his demonic form, meaning the pointy ears may have simply been carried over from his demonic form. Also it should noted that his ears are not straight like most Hylians. Another possibility is that he did not completely become a mortal and/or actually became a mortal/demon hybrid (or became mostly a mortal but retained some of his demonic heritage). 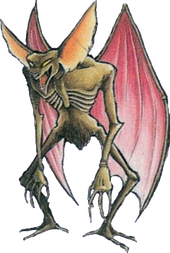 Batreaux somewhat resembles the Acheman from Zelda II and may have been inspired by them and the Ache as his desire to become and eventual transformation into a human could be a reference to the Ache shapeshifting into villagers in Zelda II.

If Acheman are members of the Demon race, it is possible that Batreaux is ether an Acheman (when he was still a demon) or that the Achemen sub-species descended from him (being either the demonic offspring of his descendants or descended from any demonic children Batreaux may have fathered while he was still a demon). It should be noted however, that since Batreaux is depicted as a lonely individual seeking for companionship, the idea of him having any children before becoming a mortal seems somewhat unlikely.

Retrieved from "https://zelda.fandom.com/wiki/Batreaux?oldid=540775"
Community content is available under CC-BY-SA unless otherwise noted.