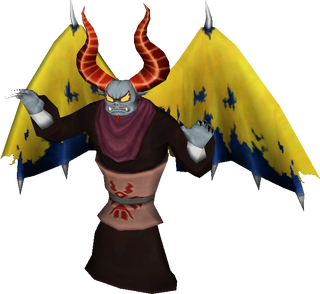 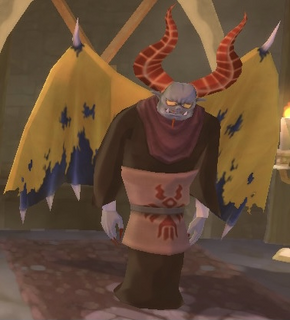 Batreaux is a friendly Demon who wishes to be Human in Skyward Sword.[2] He lives in a shack below the Graveyard of Skyloft.

At one point, Kukiel, a young girl of Skyloft, befriends Batreaux and is invited to his house. However, Kukiel's mother, Wryna, believes she is missing or kidnapped, and asks Link to find her.[3] After collecting clues concerning her whereabouts, Link manages to find Batreaux and Kukiel while they are playing a game of "scream-as-loud-as-you-can," and he nearly attacks Batreaux.[4] Immediately Batreaux explains that he would never dream of harming the citizens of Skyloft, but in fact wants to befriend them.[5] However, most citizens are frightened by his monstrous form, so he wishes to become Human.[6] Kukiel seems to be the only citizen that is unaffected by Batreaux's menacing appearance, and in fact likes his "flappy bat wings", affectionately calling him "Uncle Bats".[7]

Link can help him fulfill his wish by bringing him the Gratitude Crystals, which, according to monster legend, will turn him into a human.[8][1] When he does, Batreaux will give Link various Items and Upgrades as a reward.[9] Once he collects 80 Gratitude Crystals, he will become a Human and can be found in the Bazaar during the day and on the bridge during the night. Since his monster form radiated some sort of evil aura around the island, which caused monsters to invade the area at night and for Remlits to turn into vicious creatures, his transformation allows Skyloft to become a peaceful place once again.[10]