Zelda Wiki
Register
Don't have an account?
Sign In
Advertisement
in: Lakes, West Necluda, Locations, Locations in Breath of the Wild 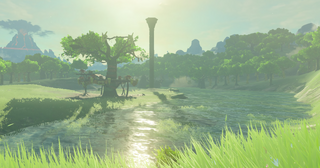 Batrea Lake is a location in Breath of the Wild.[1]

Batrea Lake is a shallow lake in West Necluda that can be found just east of the Owlan Bridge. Near the center of Batrea Lake sits a giant, hollow stump. Link can find a thin, stone tower at the end of a peninsula which cuts into the Lake. Three giant, metallic blocks can be found throughout Batrea Lake: one near the stone tower and two more which rest inside the giant, hollow stump. An enemy Platform can be found near the base of the aforementioned peninsula, atop which Link can find several Bomb Barrels.

Batrea Lake is named for Batreaux, a character from Skyward Sword.