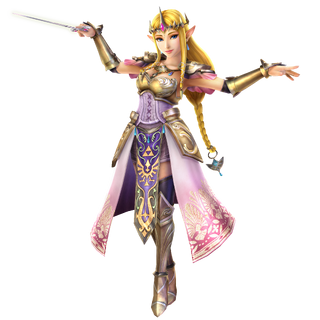 Defeating enemies
The Baton is a class of Weapon used by Zelda in Hyrule Warriors.[name reference needed] It is associated with Lightning.

The default Baton is the Wind Waker, which is directly based on its namesake. The second form of the Baton is the Sacred Baton, followed by the Glorious Baton.

The Lv.★ form of the Baton is the 8-Bit Recorder, which is modeled after the Recorder from The Legend of Zelda. It was added to Hyrule Warriors with the Majora's Mask Pack DLC. In Hyrule Warriors: Definitive Edition, instead of appearing as a separate Weapon, the 8-Bit Recorder replaces the Liquid Glorious Baton when the "8-Bit Weapons" Setting is turned on in Game Settings within the Settings menu.

Zelda summons eight tornadoes, which she conducts using her Baton and sends toward her enemies ahead of her, closing in on them. With a final flick of the Baton, she creates an updraft that knocks her enemies away. This attack damages enemies in a circular range ahead of Zelda.