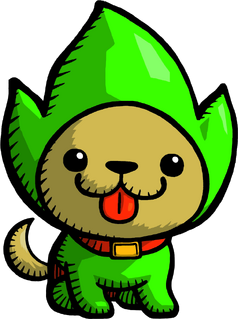 Super Smash Bros. Brawl
Barkle is a recurring character in The Legend of Zelda series.[name reference needed] He is Tingle's intelligent pet Dog.

Tingle first meets Barkle at Sunshine Seashore on the First Continent, where he can sell to Barkle all of his bones for two Rupees each and the dog will leave the area to fetch items for Tingle. When Tingle meets up with the skeleton Pirates in Cape Treasure, Barkle shows up and scares the Pirates, giving Tingle access to their Pirate Ship and an opportunity to join them. While later exploring their Pirate Hideaway, Tingle is informed of a vicious monster attacking the cook's assistant in the kitchen. Tingle is sent to deal with the monster, only to find out that it is only Barkle. Barkle leaves the hideout shortly after.

Barkle follows Tingle home and stumbles upon the Rupee Tower, and is transformed into a Tingle version of himself. Barkle then chooses to live with Tingle.

Barkle also appears in the opening scene of Ripened Tingle's Balloon Trip of Love before Tingle is sucked into the storybook.

Barkle appears as a Sticker in Super Smash Bros. Brawl.