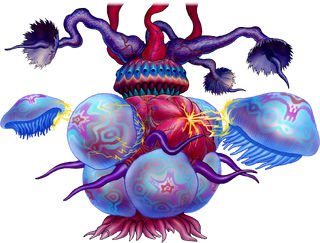 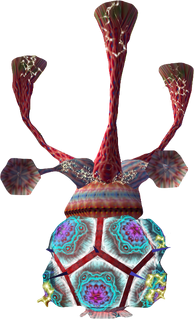 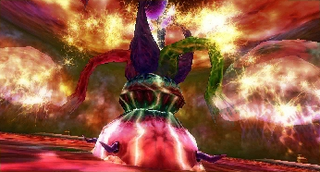 Barinade is the third Boss in Ocarina of Time,[2] residing Inside Jabu-Jabu's Belly. It is an enormous anemone-like monster that acts as a dangerous parasite to Lord Jabu-Jabu, gradually draining its host of his life energy in order to sustain itself. Barinade is the guardian of the third Spiritual Stone, Zora's Sapphire.

If Link removes Barinade's attached tentacles, five Bari surround Barinade's static core, connected via electricity. If any of the Bari or beams of electricity strike Link, he will take damage. Link uses the Boomerang to directly remove the Bari; they pop into colored bubbles when defeated. Link also uses the Boomerang to stun the core of Barinade directly, following up with attacks from the Kokiri Sword or Deku Sticks.

After Link removes the first five Bari and/or applies enough initial damage to the core, Barinade spins wildly around the room, firing blasts of electricity at Link from its tentacles. The five remaining Bari are occasionally brought close to Barinade's core, and in other cases, the core moves about the arena, extending the Bari in a loose, protective field. Barinade roots itself and unleashes a volley of electricity at Link from its tentacles after all Bari are removed. Link uses the Boomerang to again stun the core, engage a Critical Point, and directly attack again with the Kokiri Sword or Deku Sticks. If Link does not apply enough damage, Barinade will continue to spin around the room, repeating the second half of the battle.

When defeated, Barinade develops purple-pink polyps on its core and tentacles and explodes into green gas, leaving a Heart Container in its remains.

Barinade's name originated from the jellyfish-like Bari, with whom Barinade seems to have a connection.