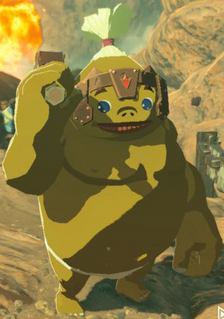 Bargoh is a character in Breath of the Wild.[1]

Bargoh is a Goron who stands watch between Goron City and the Abandoned North Mine near the Shae Mo'sah Shrine. As a guard, he carries a Cobble Crusher with him and wears a Forehead Protector. He is tasked with making sure that monsters do not enter the City, as they have started to appear following the emergence of the Divine Beast Vah Rudania.[2] If Link tells Bargoh he is lost, he will suggest climbing up high to get a feel for his surroundings.[3]

As part of his job, Bargoh stops people from heading to the Abandoned North Mine due to its danger.[4] However, he allows Link to go through, as Bludo sent him.[5]

Link may speak with Bargoh to learn the whereabouts of Yunobo, who passes him several times over the course of the "Divine Beast Vah Rudania" Main Quest. At first, he will direct Link to the Abandoned North Mine.[6] Later, he tells Link that Yunobo is at the Boss's House.[7] Once Yunobo leaves, however, Bargoh will tell Link that he is at the Bridge of Eldin, which he gives him directions to.[8] After Divine Beast Vah Rudania has been calmed, Bargoh tells Link that Yunobo has returned to Goron City.[9] He also asks Link if something happened on Death Mountain, since it looked like Yunobo had been through something.[10]