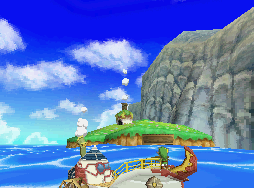 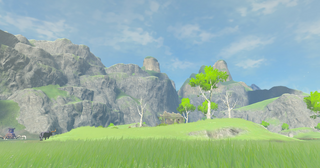 Bannan Island,(PH | BotW)[1][2] also known as the Wayfaring Island,(PH)[3] is a recurring location in The Legend of Zelda series.

Bannan Island is an Island found in the northwestern portion of the World of the Ocean King in Phantom Hourglass. It is here that Romanos' father, the Old Wayfarer, decided to begin his search for the mermaid after navigating the foggy passage north of Molida Island and living for months on the Isle of Gust.[4][5]

Later on in the game, Link must return to the Old Wayfarer's house for two reasons. Firstly, after receiving Jolene's Letter, he must return here to deliver it to Joanne, who will thank him and reward him with a Wisdom Gem.[17] Secondly after completing the Trading Sequence, Link must return to the Old Wayfarer's house in order to get his reward, which was left inside a large treasure chest.[18] However, when Link attempts to dock at the island, he is attacked by a Giant Eye Plant. After defeating it, Link is able to dock at the island and receive his reward; a Swordsman's Scroll which teaches the Great Spin Attack.[19]

Bannan Island is located in the Lanayru Wetlands with a ruined wooden structure in its center.[20] Two Rusty Halberds can be found in the ground. Like many of the islands that surround it, the dry land sits just above the wetland. Shrine Island is connected by wooden bridge to the southwest where Daka Tuss Shrine can be found.