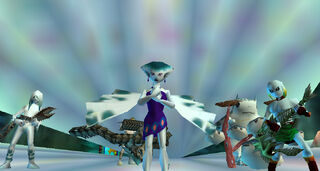 The Indigo-Go's rehearsing at the Zora Hall

The Indigo-Go's rehearse for their performance at the Carnival of Time
The Band Rehearsal is a small event in which Link can partake in Majora's Mask.[name reference needed] When Link first arrives in Zora Hall, he can assist the stage hands in adjustments with the lighting and sound. He can solve the lighting problems with Fire Arrows,[1] earning a few Rupees for his trouble,[2] and play notes for the sound technician as Zora Link, but the sound is always either too loud or too soft.[3][4]

After he has eradicated the evil in the Great Bay Temple, Link can impersonate Mikau and join the other members of The Indigo-Go's in rehearsing for their performance at the Carnival of Time. The song they play is the same song that Mikau and Japas wrote together in their Jam Session, with added vocal, drum, and piano elements. Link can begin the rehearsal by talking to Lulu, and a brief cutscene ensues. Apparently, Link was late to the rehearsal stage.[5][6]

All the Zora of Zora Hall sit up on the ledge to observe. The rehearsal is for the performance at the Carnival of Time, which they do at the Milk Bar during the New Day.