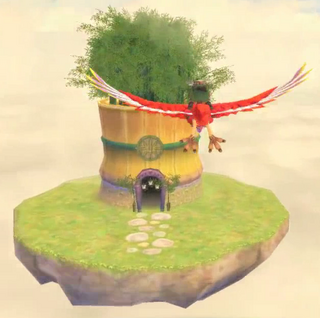 Bamboo Island is a recurring place in The Legend of Zelda series.[1] Bamboo Island goes unnamed in Hyrule Warriors.

In Skyward Sword, Bamboo Island is a small island located the Sky where Link can play the Clean Cut Mini-Game. The Mini-Game is run by Peatrice's father, Peater, who goes to the island to train. Bamboo Island is a small island, featuring a large, roofless structure that greatly resembles Bamboo. There are a couple of bamboo plants decorating the entrance to the Mini-Game and a small stone walkway. It encompasses a small forest of bamboo inside, which can clearly be seen sprouting out of the top of the structure. Link can find a Goddess's Treasure Chest here after activating the Goddess Cube near the entrance to the Earth Temple.