Zelda Wiki
Register
Don't have an account?
Sign In
Advertisement
in: Enemies, Common Enemies and Traps, Ball and Chain Enemies,
and 19 more

Not to be confused with Darkhammer, the mini-boss of Snowpeak Ruins. 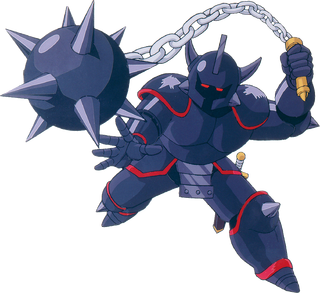 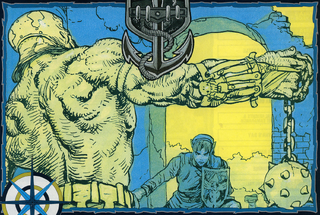 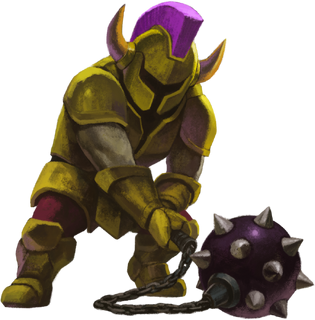 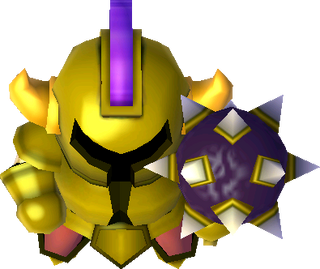 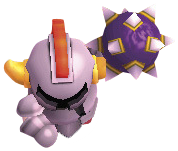 Ball and Chain Soldiers,(LA | OoS | OoA | FS | FSA | TMC | ALBW | TFH)[1] also known as Ball and Chain Troopers,(ALttP)[1] and Ball 'N Chain Guards,(CoH)[2] are recurring Enemies in The Legend of Zelda series. They are a variation of the enemy Soldiers that wield a massive spiked ball on a chain which they use to attack with. They are among the strongest of enemy Soldiers, whose whirling flails makes them difficult to approach and can inflict heavy damage. Of all the enemy Soldiers, they are also the most common throughout the series.

The attack pattern of Ball and Chain Soldiers can vary between games; in some games they will only periodically fling their maces, while in other games they will constantly spin it around them, stopping only to toss it at Link. These are crucial times for Link to strike back. In some games, a stronger variant appears wielding a ball and chain on fire, which may seriously burn Link if he is struck by it.

In A Link to the Past, like other Soldiers, Ball and Chain Troopers are Hyrulean guards that have been brainwashed by Agahnim and are under his control. They attack by swinging their flail whenever Link is close, but will only swing it around periodically, allowing Link to quickly move in and strike back when the Soldier is not wielding his weapon. A unique, grey Ball and Chain Trooper first appears in the prison dungeon of Hyrule Castle, where he is guarding the Big Key to Princess Zelda's prison cell. Link can use the Boomerang to stun him, allowing him to get an easy strike, but the Soldier will soon recover. The Ball and Chain Trooper is also notably weak to thrown Pots, which can be picked up from the open cell and thrown back at him. Two thrown Pots are enough defeat him.

Later, when Link infiltrates the Hyrule Castle Tower on his way to face Agahnim, he encounters gold-colored Ball and Chain Troopers. These Troopers have the same strength as the grey one previously encountered, but come in pairs which makes fighting them harder. By the time they are encountered, Link has more items at his arsenal that he can use to fight them with. Link can place Bombs to explode when they are close, or fire Arrows from a safe distance with his Bow.

The Ball, and Chain was noted to be a popular weapon among Ganon's forces used for sharp and powerful attacks that could greatly damage enemies.[3]

In Link's Awakening, a single Ball and Chain Trooper known as a Knight appears in the final room of Kanalet Castle. Like the other occupants, it was one of Prince Richard's servants until going berserk, and turning on its liege.[4] It will swing its mace in its hand before tossing it at Link, which when struck, saps one whole Heart from Link's life meter. Like the Ball and Chain Trooper from A Link to the Past, it can be attacked when it is not tossing its mace. Link also needs to be careful while fighting it, as the ground along the walls are cracked and will crumble if stood on for too long. Once defeated, the Ball and Chain Soldier will drop one of the Golden Leaves. Despite being unique, the Knight will respawn.

In Oracle of Seasons, Ball and Chain Soldiers can be found in the Ancient Ruins and the Sword & Shield Maze. They are one of the few enemies that are immune to the effect of Gale Seeds when shot from the Seed Shooter or Slingshot, and cannot be blown back by them.

With the Master Sword and the Red Ring equipped, the Ball and Chain Soldiers can be defeated in one fell swoop.

In Oracle of Ages, Ball and Chain Soldiers can be found in the Crown Dungeon. They are one of the few enemies that are immune to the effect of Gale Seeds when shot from the Seed Shooter or Slingshot, and cannot be blown back by them.

With the Master Sword and the Red Ring equipped, the Ball and Chain Soldiers can be defeated in one fell swoop.

In Four Swords, Ball and Chain Soldiers appear as gold knights wielding spinning flails. Unlike previous games, they will continuously swing their maces around them, protecting them from most attacks, before tossing it at the Links. The moment they toss it leaves the rest of their body vulnerable to attacks. They appear in Talus Cave and Vaati's Palace.

Four Swords Adventures offers a number of different types of Ball and Chain Soldiers, characterized by their armor's color. The common gold variety swings its ball and chain in a constant large loop that increases speed when hit. The black variety is similar to the original soldier from A Link to the Past, in that it aims its flail directly at the Links as before, and smashes through obstacles in the process. Just like A Link to the Past, they are corrupted Hyrulean guards.[5]

A newer variety is the red-colored Ball and Chain Soldier, which adds a new twist in the form of a fiery mace that leaves behind a huge trail of flames. The only safe method of bypassing this flaming barrier is to use the Roc's Feather to jump over it.

The blue variety is extremely rare and only appears in the Tingle's Tower multiplayer gallery during the "Monster Hunting Returns" minigame. These soldiers swing their flails in a loop similar to the gold soldiers, but will switch between swinging in a small loop around their head, to a huge lashing swipe that travels far.

The Ball and Chain Soldiers are often seen alone or in pairs, usually appearing as the last in a swarm of regular Soldiers. They are also quite common in the Palace of Winds, and one final trooper is summoned by Ganon right before the final battle.

In The Minish Cap, Ball and Chain Soldiers appear the same as in Four Swords, as gold Soldiers that swing flails around them. As in previous games, they can be attacked after their maces are tossed. A unique attack strategy incorporates the use of the Roc's Cape to inflict damage from above with the Sword, all the while evading the lateral toss of the ball and chain. They have a tendency of dropping Big Green Rupees when defeated. They appear in the Palace of Winds, Dark Hyrule Castle and Simon's Simulations.

Ball and Chain Soldiers in A Link Between Worlds are strongly based on their A Link to the Past incarnation. Like other enemy Hylian Soldiers, the Ball and Chain Soldiers were originally Paintings that were painted by and brought to life by Yuga. Unlike the Troopers from A Link to the Past, these enemies constantly swing their flails around them as opposed to only periodically, and will toss their flails at Link twice before swinging them again. They will also begin to use their flails as shields if Link fires repeated Sword Beams or Arrows at them. Both Grey and Gold colored variants exist; while they behave identically, the Gold variant takes more hits to defeat. They appear Inside Hyrule Castle and Treacherous Tower.

In Lorule Castle, two Lorule Ball and Chain Soldiers wielding fiery maces appear as Sub-Bosses. They are fought in dark rooms, which their fiery weapons can light as they are spun. One also appears in Treacherous Tower on the 39th floor of the Advanced level.

In the A Link to the Past manga by Akira Himekawa, Link faces the Ball and Chain Trooper on his way to rescue Zelda in much the same way he does in the game. Upon orders from Agahnim, the soldier smashes through a wall to reach Link, and attacks him with his giant weapon. Link manages to avoid getting struck, but is caught by the chain around his neck and dragged across the room. He lands near some jars, and with quick thinking, he grabs one and throws it at the Trooper, which knocks the helmet off, revealing nothing underneath. A black mist emerges from the armor as it collapses, and as Link sits shocked, Zelda explains that the soldier was not human and was living darkness controlled by Agahnim.[6]

Ball 'N Chain Guards appear as enemies who move to the rhythm in Cadence of Hyrule. They move on every second music beat, usually crouching before hopping onto an adjacent tile. When Cadence, Link, Yves, or Zelda get too close, they will pause for one music beat before swinging their flails on the next beat, dealing damage to any heroes or enemies that stand within a 3x3 square radius.

A stronger pair of Ball 'N Chain Guards wearing black armor also appear as a Minibosses in the Future World. The chains of their flails are connected and only sever when they are defeated. They possess more health and attack power than their green counterparts.