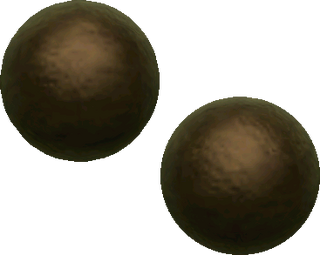 Rune (BotW)
Balls are recurring traps in The Legend of Zelda series.[citation needed]

A larger type of Ball, called the Gargantuan Ball, also makes an appearance in The Legend of Zelda series.

In A Link to the Past, Balls appear mainly in Dungeons, rolling around rooms causing damage to Link whenever he touches one. They serve as obstacles that Link must avoid while solving puzzles or fighting Enemies.

In A Link Between Worlds, Balls appear similarly to their appearance in A Link to the Past. Balls are launched from huge openings in Dungeon walls and careen down corridors and across rooms. They will either appear in an endless and varied stream from a larger openings, or are fired one after the other from smaller openings. Larger openings can also occasionally launch Gargantuan Balls.

In Tri Force Heroes, Balls appear in the beginning section of The Lady's Lair. Four chutes at the room's north end launch Balls toward the Links while the trio attempts to solve a mechanical puzzle to gain entrance to the Lair. Rather than rolling back into small openings at the other end, these Balls will crash into the wall and crumble. Gargantuan Balls appear in the preceding Level, the Training Ground.