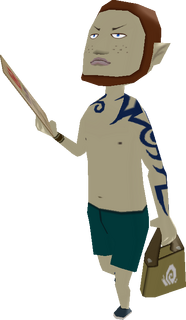 Baito is a character in The Wind Waker.[3]

Baito can be first seen trying to apply for the Mail Center job, wandering around Dragon Roost Island after Link completes Dragon Roost Cavern. He is eventually hired at the Island Postal Service after Koboli, impressed by Link's contribution to the mail sorting, decides to hire a permanent assistant. In addition to his regular duties, Baito allows Link to sort letters as a Minigame, where he is challenged to sort at least 25 letters. If Link manages to sort 25 or more letters, Baito will ask him to put a letter in the mail to his mother talking about how great he is. Some time after sending the letter, Link will receive a reply from Baito's mother, Kashiko,[2] with a Piece of Heart inside. Due to Link's impressive mail sorting abilities, Baito will compliment and praise him with any opportunity he gets.