Zelda Wiki
Register
Don't have an account?
Sign In
Advertisement
in: Items, Bottle Items, Items in The Legend of Zelda,
and 6 more
English 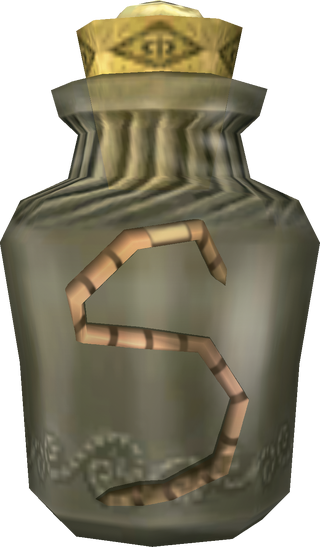 Worm, a type of Bait from Twilight Princess

Luring enemies or animals
Bait is a recurring type of item in The Legend of Zelda series.[1] They are various kinds of items that are used to lure enemies and sometimes certain types of animals.

In The Legend of Zelda, Food is purchased from shops and can be used to attract enemies. It is also necessary to move away Goriyas in certain Dungeons.

In Oracle of Seasons and Oracle of Ages, Scent Seeds can be used as ammunition, or simply placed on the ground to lure enemies close. Enemies are notably unable to resist the scent it leaves when it cracks open, and will even fall down holes while going after the seed.

In The Wind Waker, All-Purpose Bait and Hyoi Pears appear as Bait. Both items are kept in the Bait Bag, and can be purchased from Beedle's Shop Ship.

All-Purpose Bait is used to feed Fishmen so they will draw the corresponding island in Link's Sea Chart. The Fishmen will also give information regarding the island. The All-Purpose Bait can also be used to draw near animals such as Seagulls and Pigs, with the latter digging in the soil after eating it. The Bait can also be used in front of Rat Holes to call Rats, which will sell Link more Bait or Potions.

Hyoi Pears can be used to possess Seagulls, which can fly to hard-to-reach places and items.

In Twilight Princess, Bait comes in two forms: Bee Larvae and Worms. Both are used for Bobber Fishing.

In addition to being used as fishing bait, the Bee Larva can also be eaten by Link to recover a quarter of a Heart per larva.

Worms can be obtained from Bomskits or from digging in mounds of dirt as Wolf Link.