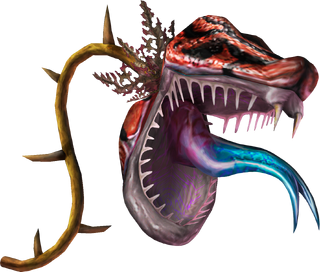 Baba Serpents are sentient plants that emerge from their roots to attack Link when he treads nearby. When a Baba Serpent is chopped off its base, it hops around to hunt down Link. If they get close to him, they will clamp their jaws around the hero, who must use a Spin Attack to escape. Most Baba Serpents are rooted to the ground, but they may also be found hanging from the ceiling of an enclosure. When Link fights Ook in the Forest Temple, the latter tosses the Gale Boomerang to sever a few Baba Serpents from the ceiling to aid him. The best way to defeat multiple Baba Serpents, or even just one that has bitten Link, is to perform a Spin Attack. They have thorns on their stalks, orange heads with black stripes, and blue and purple forked tongues. They also have fangs and seemingly a nose.