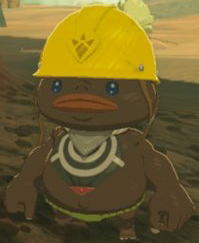 Axyl is a character in Breath of the Wild.[2]

Axyl is a child Goron who is found at the Southern Mine in the Eldin Canyon. During the day while the adult Gorons mine, he and Pelison play together. After Pelison leaves for Tarrey Town, he will roll around the mine's pickaxe statue. At night, he mumbles in his sleep about his father and not being able to eat another bite.[3][4]

When spoken to, Axyl is surprised to see Link, a Hylian, in the area.[5] He wonders if Link intends to go to Goron City to sightsee,[6] and is surprised to hear that he intends to go all the way to Death Mountain.[7] Axyl warns him that the area ahead is really dangerous due to the Divine Beast Vah Rudania, according to his father.[1][8] He tells him that he should go home and should listen to what the adult Gorons say.[9] However, he also secretly encourages him to dig for Gems at the Death Mountain Summit.[10]

If Link tells Axyl he's already been to Goron City, he will be dismissive and say goodbye.[11]