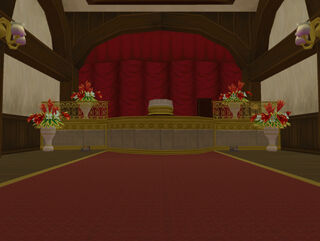 The Auction House,[1] also known as the Hall of Wealth,[2] is a location in The Wind Waker.[note 1]

At the beginning of the game, the Auction House is owned by Mila and her father on Windfall Island. Mila's Father allows Zunari to hold a Windfall Auction on the first floor every night.[4] However, when he gives the remainder of his money to Tetra's Pirate Crew and becomes poor, Maggie and her Father become rich from the Skull Necklaces Maggie received from a Moblin named Moe, and they begin living in their House. Maggie and her Father live on the second floor, and allow the Auctions to continue on the first. Link can give Maggie's Father 20 Skull Necklaces in exchange for Treasure Chart 2. If Link breaks one of the Extremely High-Class Bone-China Vase on the first floor, he will receive a warning,[5] but will be forced to pay 10 Rupees for every subsequent Vase he breaks.[6] However, once Maggie and her Father buy the mansion, they will no longer charge this fee.

Houses in The Legend of Zelda series
Community content is available under GNU Free Documentation License unless otherwise noted.
Advertisement