Astrid is a character from The Legend of Zelda: Phantom Hourglass. She is a fortune teller who resides on the Isle of Ember.

Astrid once had an assistant named Kayo. He was the only person who knew how to unlock Astrid's basement door, but he was killed when the Ghost Ship arrived on the Isle of Ember. Astrid was hidden in her basement by Kayo to protect her from its "ruinous reach". She finally gets rescued by Link when he meets Kayo's ghost, who informs him that the three torches are the key to unlocking the door. Once Astrid is freed, she becomes friends with Link. Astrid helps Link throughout his quest by giving him hints on what to do next. Her ability to read from her crystal ball proves to be fairly useful throughout the game, because if Link ever forgets what he is doing or is at a loss at the next destination, Astrid will remind him for free.

If Link returns to Astrid directly after obtaining the Regal Necklace from Brant, she informs him that she is a descendant of the Cobble Kingdom and that he was destined to meet her.

"Astrid" likely comes from the Greek word root ast, meaning "star", as seen in the words "astronomy" and "asteroid". This is fitting because the stars can be used to tell one's fortune in the practice of astromancy. 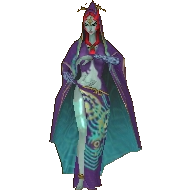 As part of the Phantom Hourglass & Spirit Tracks DLC, Twili Midna's Standard Outfit (Grand Travel) is a Astrid Recolor. It can be obtained on the Grand Travels Map.

Retrieved from "https://zelda.fandom.com/wiki/Astrid?oldid=494167"
Community content is available under CC-BY-SA unless otherwise noted.