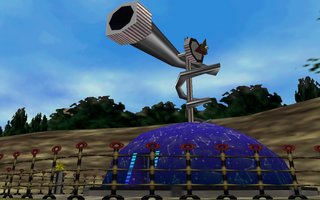 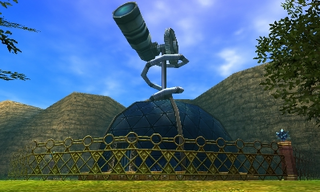 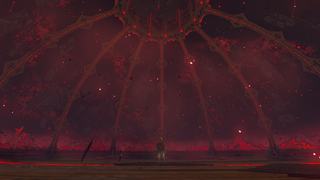 Majora's Mask
Breath of the Wild

The Astral Observatory is a recurring location in The Legend of Zelda series.[1][2]

The Astral Observatory a building outside the walls of Clock Town in Termina Field in Majora's Mask. It is home to a giant Telescope, which is able to view the landscape of Termina, and also serves as the hideout of the Bombers.[3] Although the Observatory is located in Termina Field, the building is entirely fenced in, preventing entry through normal means outside. It is possible to enter the Astral Observatory by either reciting the Bombers code to the Bomber in East Clock Town, or by flying in with a Deku Flower.

The passage to the Observatory is guarded by one of the 6 children of the Bombers, who must be told a 5-digit password in order for Link to gain entry. The password is acquired by popping the Balloon in North Clock Town, talking to Jim, finding every member of the Bombers hidden throughout Town, and proceeding to recite the code to the Bomber guarding the passageway. Link can also use a Deku Flower in Termina Field to enter the Astral Observatory's dome.

Once Link enters the Astral Observatory's tunnels, he must go through a small sewer, destroy another Balloon, then go up the ladder leading to the Observatory itself.

Beyond the sewer segment of the Astral Observatory, Link can meet the famous dancing Scarecrow, Pierre. Upstairs, the hero will find the astronomer named Professor Shikashi with the huge Telescope overlooking Termina Field.[4] There is a Moon's Tear encased in a glass next to the Telescope, and upon checking it, Professor Shikashi comments on how he finds the stones falling from the Moon's eyes, and how they have been falling recently.[5] By using the Telescope to gaze at the Skull Kid atop the Clock Tower, Link can obtain his own Moon's Tear, which is required to start the "Business Scrub Scramble" Event. Through the Telescope, Link can also see two men waving at him, signifying the presence of Grottoes in the ground that he can venture into. The Part-Timer can also be seen in a Tree, trying to grab two Red Rupees. By watching the walls over South Clock Town, Link can spot a Business Scrub flying into a Grotto, initiating the "Follow That Scrub!" Event.

Link can find a Treasure Chest containing a Silver Rupee behind a bombable wall near the sewer-side entrance of the Astral Observatory.

Following Calamity Ganon's escape from Zelda's sealing magic, Link and Calamity Ganon both safely fall into the Astral Observatory and engage in combat. If Link has freed Divine Beasts from Calamity Ganon's control, the Champions piloting each Divine Beast—in the same pattern of the aforementioned beasts that Link would otherwise fight[6][7][8][9]—will launch an attack on Hyrule Castle and converge the beams emitted from their Divine Beasts down the pit, pelting Calamity Ganon with an array of lasers which whittle his health down cumulatively. The damage dealt from each Divine Beast is measured in increments of 12.5%, with all four Divine Beasts inflicting enough damage to remove 50% of Calamity Ganon's total health. If Link has not freed any Divine Beasts, the battle will begin with no initial damage dealt to the Scourge of Hyrule Castle. Upon defeating Calamity Ganon, he will shed his mortal form and escape from the Astral Observatory to Hyrule Field. Following suit, Princess Zelda will transport Link to Ganon's location, where she explains that he has assumed his most true and basic form as the very embodiment of his rage, Dark Beast Ganon, in a final attempt to destroy Hyrule.[10]