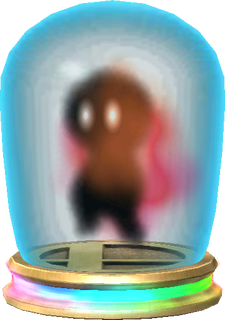 Trophy
Assist Trophies are recurring Items in The Legend of Zelda series.[1]

Assist Trophies are capsule-like items in the Super Smash Bros. series, first appearing in the third installment, Super Smash Bros. Brawl. They appear at random during battles and are automatically broken open when picked up by a fighter, summoning a random non-playable character that will aid the fighter in battle for a short time.

The characters summoned with Assist Trophies originate from a wide variety of game series, including some that are not represented with playable fighters. A total of five characters from The Legend of Zelda series have appeared as Assist Trophies.

In Super Smash Bros. Brawl, the only Zelda character among the 27 Assist Trophy characters is Tingle, in his The Wind Waker appearance.

When Tingle is summoned, he will stand in the background away from the fighters and perform his signature "Kooloo-Limpah!" dance. Instead of tossing confetti, though, one of the following strange effects will occur at random:

Tingle returns as an Assist Trophy in Super Smash Bros. for Nintendo 3DS / Wii U, appearing along with Ghirahim, Midna and Skull Kid, for a total of 39 Assist Trophies.

Ghirahim will agressively attack any nearby opponents by slashing his blade and throwing daggers. He can traverse the stage by dashing, jumping, and teleporting.

Midna will stand in a relaxed pose for several seconds, then attempt to grab and throw any nearby opponents with her hair, inflicting 20% damage per throw. She can also teleport around the stage to get closer to opponents.

Skull Kid will hover in the background, producing a visual effect similar to when he screams at the Moon during the battle against him in Majora's Mask. One of the following disruptive effects will occur at random, remaining in effect until Skull Kid disappears.

Ghirahim and Midna appear from Assist Trophies at an average rate. Skull Kid appears at a slightly lower rate, and Tingle lower still.[2] It is possible to eliminate Ghirahim or Midna from the battle by attacking them several times.[1]

Tingle no longer appears as an Assist Trophy in Super Smash Bros. Ultimate, possibly because he is relegated to a background character in the returning Great Bay stage. All other Assist Trophies from the Zelda series return, along with newly-added Moon in its Majora's Mask 3D appearance, bringing the total to 59. When summoned, the Moon appears far in the stage's background and gradually crashes down upon the opponents, taking up much of the screen and dealing multiple hits for up to 60% damage.

New to Ultimate is the ability to have multiple Assist Trophies appear at once; the characters summoned can even wind up fighting each other. Players can now earn a KO point by eliminating certain Assist Trophy characters from the battle, including Ghirahim and Midna.[3]