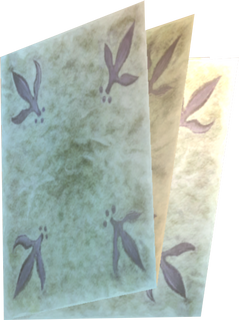 Auru's Memo
Ashei's Sketch is an item in Twilight Princess.[1] It is a drawing by Ashei depicting Yeto holding a Reekfish.[2]

Ashei's Sketch is given to Link by Ashei when he talks to her at the entrance to the path to Snowpeak.[3] After showing it to Ralis, the prince will give Link the Coral Earring to help the hero catch a Reekfish.[4] It is never shown what the sketch looks like, though it is later revealed that the monster on it is a picture of Yeto, as he traveled down from Snowpeak to find food to help his sick wife Yeta.[5]