Not to be confused with Ashai, a character from Breath of the Wild. 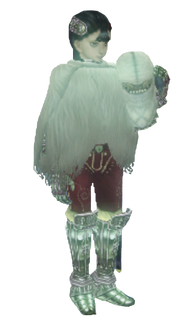 Unnamed knight of the Royal Family of Hyrule (father)[2]

Ashei is character in Twilight Princess.[3] She is a member of the Resistance.[2] She is a strong young woman with raven-black hair and impressive knowledge of the mountains. She is the one who aids Link in investigating the evil at Snowpeak Ruins.

Ashei was raised in the mountains by her knight father, who taught her the art of war.[4] She is seen carrying a Sword and later a Hero's Bow and a Quiver of Arrows. Due to her rather masculine upbringing, she took on a somewhat blunt personality and a rough way of speaking.[5] As she has a derogatory view of the Soldiers of Kingdom of Hyrule,[6] she is rude to Link at first.[7]

She is interested in finding out why evil seems to control the mountain of Snowpeak,[8] and later tries to figure out the reason for the beast sightings around Zora's Domain.[1] When Link goes to meet her there, she gives him Ashei's Sketch, which depicts a Yeti holding a Reekfish.[9] After Fishing and catching a Reekfish, Link is able to follow the fish's strong scent through the blizzard encompassing Snowpeak.

When Link enters Hyrule Castle, just as he is about to get overwhelmed by enemies, Ashei and the rest of the Resistance arrive and clear a path, allowing Link to proceed to the last few floors of Hyrule Castle and eventually reach Ganondorf.

After Kingdom of Hyrule returns to peace, Ashei, Shad, and Auru can be seen at the Sacred Grove exploring its ruins.

In Super Smash Bros. Brawl, Ashei appears as a Trophy.

In Twilight Princess manga by Akira Himekawa, Ashei states that the Snowpeak Ruins was once her home where she learned how to fight before her family abandoned it. After she learns that the Yeti couple who have made her former house their home are harmless, she allows them to remain there.