"Hee hee hee! This is my FAVORITE spot to gaze out at the sea. When I play with the gulls, I call it "Aryll's Lookout.""
— Aryll

) is a character from The Legend of Zelda: The Wind Waker. She is Link's younger sister. She is currently the only confirmed sibling Link has throughout the franchise.

Aryll and Link both grew up on Outset Island under the care of their Grandma. Aryll developed a fondness for seagulls, which often flocked to the lookout tower of Outset Island, which she named Aryll's Lookout. Her telescope also has seagulls painted on it. The closest thing to a fellow Hylian friend Aryll has seems to be Sue-Belle, the woman who is constantly seen carrying a jar.

At the beginning of the game, on Link's birthday, Aryll loans him her treasured Telescope as a birthday present. However, when Link looks through the telescope, he sees a huge bird known as the Helmaroc King take Tetra hostage. Link chases after her into the woods on the island. After rescuing Tetra from the Bokoblins in the woods, the bird sets its sight on Aryll and takes her away to the Forsaken Fortress, the stronghold of Ganondorf. The Helmaroc King had been ordered by Ganondorf to kidnap all pointy-eared girls on the Great Sea, believing that one of them may truly be Princess Zelda. Link travels with Tetra's Pirates to the Forsaken Fortress, but is unsuccessful in rescuing her and the other kidnapped girls.

Later, Link returns to the Forsaken Fortress and defeats the Helmaroc King, rescuing Aryll and the other girls successfully. Aryll stays on the pirate's ship in order to keep her away from Ganondorf's grasp. She is not seen again until the end credits, where she is wearing a half-maroon, half-white dress with a skull design. She then returns home to Outset Island with Link. She is among the crowd that bids Link farewell at the end of the game when he sets off with Tetra and her pirates to find a new land to call Hyrule.

In the character design notes for Aryll inside the Zelda Box's book, Eiji Aonuma said that Aryll was originally going to be named Mariru (マリル, Mariru?) to be similar to Marin from Link's Awakening and Malon from Ocarina of Time. As such, certain similarities between Aryll and Marin can be explained, such as their affinity for seagulls and the red hibiscus in Marin's hair that appears on a pattern on Aryll's dress.

Aryll the Sage of Sea

Aryll has been thought to have been the third sage scrapped from the Wind Waker, since the original Nayru's Pearl dungeon was removed entirely from the game's story. This is further proven by the fact she has her own held item that is signature to her that could have been a flute or other woodwind instrument instead of a telescope, and would fit in with the Earth, Sky, and Water spirit theme, as Medli and Makar already represent the Earth and Wind/Sky gods and their respective dungeons. Thus leaving her with the Sea element, possibly meaning both her temple and Greatfish Isle's would of been ice or water dungeons. She is also of another race, representing Hylians and has her own theme song which plays during Medli and Makar's Earth God's Lyric and Wind God's Aria in the credits complimenting the piece almost like it was supposed to be a part of it, meaning this song could of been her awakening song during production (example; Sea God's Ensemble or something) and was eventually scrapped. Her representing Hylian people would also reveal what race would of lived on Greatfish Isle before it's destruction. The Water Spirit Jabun also flees to Outset Island also supporting this.

Another thing to note is that since Saria from Ocarina of Time is the Sage of Forest and you know her since the beginning of the game and are close friends with her, it would not be surprising if Aryll was also a sage since she is also a character Link has close bonds with and you meet her at the start of the game in Wind Waker.

It is never revealed what happened to the Hero of Winds' family after The Wind Waker or if he ever saw them again after the discovery of New Hyrule. Presumably he returned home while Tetra and her crew built the kingdom of New Hyrule. One interesting possibility is that the Link from Spirit Tracks is her descendant who's relation to his old friend's sister is unknown to Niko as he only notes Link reminds him of the Hero of Winds. If the Spirit Tracks Link is her descendant than he could either be her son or grandson as she is younger than Tetra or the Hero of Winds who are both apparently deceased during the events of Spirit Tracks. Presumably she either remains on Outset Island while Link lives in New Hyrule or passed away before Link moved to Abode Village if she was still alive as he may have been born after her death which would be more likely if he were her grandson as Niko is the only person from The Wind Waker to be shown living in New Hyrule as Tetra and the rest of his old crewmates are deceased. 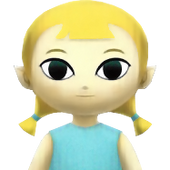 Aryll appears as the one to speak for Toon Link (just like Proxi does for Link and Young Link) via the Pirate's Charm, allowing him to remain a silent protagonist. Lana and Linkle also have recolor of their standard costumes that are based on Aryll's blue flower dress. As part of the Master Wind Waker DLC, Cia's unlockable DLC costumes (as Cia has three Standard Outfits) are Skull Dress Aryll Recolor. Aryll's dresses also appears as Fairy Clothing for Companion Fairies.

Additionally during the development of Hyrule Warriors, Linkie was originally conceived as Link's sister with her originally backstory presumably being inspired by Aryll. Though it was ultimately scrapped in Hyrule Warriors Legend, Linkie's affinity for Cuccos (resembling Aryll's affinity for Seagulls) and her Aryll inspired outfit presumably reference her scrapped original backstory. Additionally both Aryll and Linkie are associated with navigational tools: a Telescope and Compass respectively.

Aryll is featured as a sticker. Her sticker gives a +8 bonus to electric attacks, and can be applied to any character. 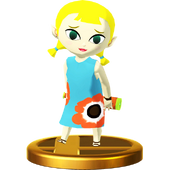 Aryll appears as a Trophy which is part of The Wind Waker Trophy Box.

Aryll in her Skull Dress 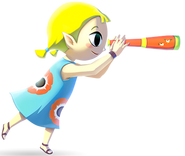 Artwork of Aryll from The Wind Waker HD 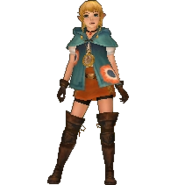 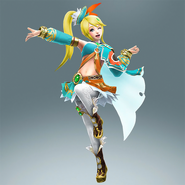 Promotional Render of Lana in her Standard Outfit (Wind Waker) her Recolor based on Aryll from Hyrule Warriors Legends
Add a photo to this gallery
Retrieved from "https://zelda.fandom.com/wiki/Aryll?oldid=543443"
Community content is available under CC-BY-SA unless otherwise noted.