Zelda Wiki
Register
Don't have an account?
Sign In
Advertisement
in: Enemies, Enemies in Ocarina of Time
English

It has been suggested that this article or section be merged with Unused Content. 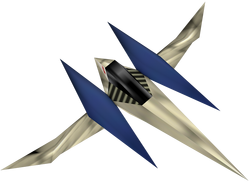 The Arwing is the vehicle used by the Star Fox Team in the Star Fox series. In Ocarina of Time, an unused enemy Arwing can be found by modifying the games data either by hacking or using a cheat device. When Link enters an area with an Arwing, a small cutscene will play showing the ship appearing. The Arwing will then proceed to fly around the area and attack Link with its lasers.

The Arwing was used to test the flight patterns of Volvagia.[1] It was left in future versions of the game (both the Nintendo GameCube and Virtual Console ports). The Arwing is not present in Ocarina of Time 3D.