Zelda Wiki
Register
Don't have an account?
Sign In
Advertisement
in: Villages, Locations, Locations in The Wand of Gamelon 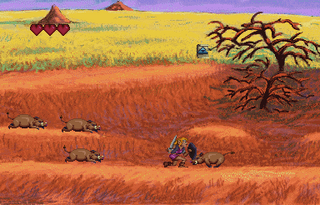 Aru Ainu is a location in The Wand of Gamelon.[1] Along with Kobitan and Sakado, it is one of the game's starting stages.

Aru Ainu is a small village settled in the northwest of Gamelon, situated within a vast stretch of barren grassland. The area is a deserted plain with only a few trees that have lost all of their leaves. The villagers all ran when a Gleeok came to the settlement, leaving only Lubonga as the lone inhabitant.[2] The village is heavily overrun by Boars.

The village consists of two huts, the first of which leads to an open pit containing a small flock of Keese and a large Dodongo that holds the Key to the second hut, where Lubonga resides. Inside this hut, Lubonga knits a Shroud without fear of the monsters outside, and gives the item to Zelda, claiming that it will "scare the wraps off Gibdo", referring to his weakness. A Triforce Map also appears in this hut. Upon completion of this stage, Tykogi Tower is unlocked.