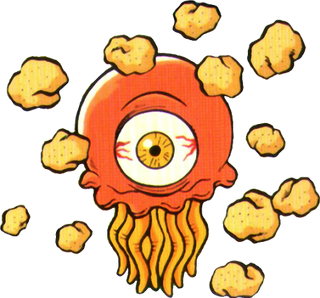 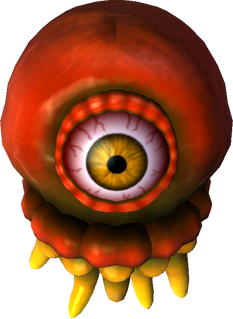 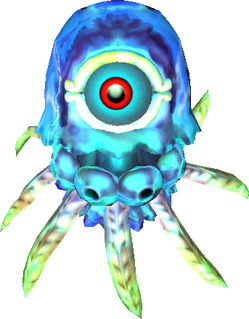 Arrghus is a recurring Boss in The Legend of Zelda series.[2] It is typically seen as a large, one-eyed jellyfish that is usually surrounded by miniature polyps called Arrgi.

In A Link to the Past, Arrghus is the Boss of the Swamp Palace, where it is the guardian of the second Crystal. Arrghus appears densely surrounded by multiple Arrgi. These Arrgi and the creature's ability to float make it invulnerable to normal attacks. Its method of attack is to send the Arrgi swirling outwards. The Arrgi must be pulled away using the Hookshot and then defeated with the Fighter's Sword. When all of the Arrgi are gone, Arrghus launches itself into the air and attempts to crash straight down upon Link, then speeds across the shallow water of the room. It will also shoot needle-thin lasers at the ground, which will create huge explosions, throwing columns of water into the air. In this state, it is unprotected and can be attacked with Link's Fighter's Sword or other weapons. After each hit, it attempts to crush Link from above again, or shoots more lasers at him. After its destruction, it leaves behind a Heart Container and Link is presented with the second Crystal in which one of the Seven Maidens is imprisoned.

In the Game Boy Advance version of A Link to the Past, an orange Arrghus is the guardian of the green Four Sword shard in the Palace of the Four Sword. Instead of Arrgi, Arrghus is surrounded Bari, which will sometimes shock Link when he pulls them away from their host. This Arrghus is also stronger and faster. Once the Bari are removed, it is able to both change direction while skating around, as well as summon swarms of Kyamerons.

In A Link Between Worlds, an Arrghus is the Boss of the Swamp Palace, where it protects the Painting of the Sage Oren. Arrghus is fought much the same way as in A Link to the Past, as Link must pull off the Arrgi from its body using the Hookshot and defeat them one-by-one. As before, Arrghus will also occasionally send the Arrgi diving down towards Link in attack. After defeating all the Arrgi, Arrghus's eye will open and it will attempt to crash down onto Link, as well as attempt to shoot streams of laser beams that boil the water beneath Link. It can be attacked by any weapon when it lands. After it is defeated, it will leave behind a Heart Container as well as the Painting holding Oren.

In Tri Force Heroes, Arrghus appears as the boss of the Water Temple Level. It appears as a watery, blue jellyfish surrounded by eyeballs protected in water barriers. When the Links arrive, eight eyeballs will emerge from the pool in the center of the room. These eyes will attempt to dive at the Links, and will alternate between submerging and surfacing. The submerged eyeballs can be resurfaced with a blast of water from the Water Rod, which will also stun them. They can also be stunned with the Water Rod while diving towards the Links. The surface eyes can be pulled apart with the Gripshot. Once stunned or pulled away, they can be attacked with the Sword before trying to reunite with their group. Once all the eyes are defeated, the pool will drain as Arrghus reveals itself.

Arrghus will float around the room while releasing several of its red eyes at the Links at once. As it is floating too high for the Links to pull off its eyes from the floor, the Links must raise themselves either by using the Water Rod's water pillars or by forming a Totem, although the Water Rod is recommended as it is much faster. Once all of its eyes are defeated, Arrghus will open its real eye and commence its attack by firing blasts of ink around it. If any of the Links are caught in its attack, they will be covered in ink and will be temporarily unable to use their item. The Links must fight it by creating pillars of water with the Water Rod, then aim the Gripshot at its eye when it is open. This will stun Arrghus and allow the Links to strike back. After taking enough damage, Arrghus will be defeated.

A creature resembling Arrghus is featured in Chapter 9 of the A Link to the Past comic by Shotaro Ishinomori. Fought in the Swamp Palace similarly to the game, the monster is shown as a bright red jellyfish that attacks with tentacles, but no eyeballs are shown. In the comic, as Link makes his way to the imprisoned Maiden, a large, tentacled monster attacks him. He thrusts the Master Sword into the monster and defeats the creature, which spits out Link from inside and gives him a chance to destroy the floating Crystal where the Maiden is imprisoned.

The name Arrghus may be a reference to Argus Panoptes, an all-seeing, hundred-eyed giant from Greek mythology.

Its Japanese name, ワート (Wāto), translated as Wart, may be in reference to the growths or lumps of creatures that characteristically covers it. It shares this name with Wart.