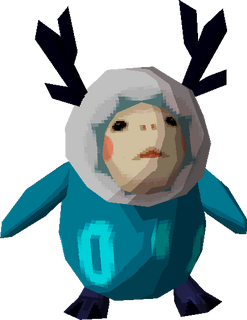 Aroo is an Anouki who lives in the Anouki Estates on the Isle of Frost in Phantom Hourglass.[3]

Right before Link lands on the Isle of Frost, a Yook violates the peace agreement between the Yooks and Anouki and kidnaps Aroo.[4] He then disguises himself as Aroo and sets the whole village into an uproar because no one knows who the Yook disguised himself as. The Yook disguised as Aroo tells Link that Kumu is the liar,[5] but Kumu and Gumo warn Link that Aroo is the one who is lying.[6][7] Link discovers that what appeared to be Aroo was actually a Yook, because logic deduced that it was lying.[8] After Link restores peace by beating Gleeok in the Temple of Ice and frees Aroo, the Anouki is so grateful that he sends Link a letter containing a Wisdom Gem.[2]

Anouki in The Legend of Zelda series
Community content is available under GNU Free Documentation License unless otherwise noted.
Advertisement