Zelda Wiki
Register
Don't have an account?
Sign In
Advertisement
in: Hylians, Hyruleans, Characters, Characters in The Legend of Zelda (Valiant Comics) 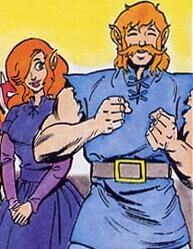 Arn and his wife, Medilia

Medilia (wife)
Link (son)
Unnamed Son[1]
Arn is a character in the The Legend of Zelda comics by Valiant Comics published by Valiant Comics.[2] He is the father of Link and at least one younger male child.[1] He and his wife, Medilia, reside in a small home in the kingdom of Calatia.[2]

During Link's absence from Calatia, he received a notorious reputation. An impostor of Link had overthrown the kingdom of Calatia and imprisoned the queen, greatly shaming both Arn and Medilia. When the unsuspecting Link returns home to visit his family,[2] he receives a violent greeting from Arn and is told to never show his face again, claiming that Link is no son of his.[3] Shortly after, Link discovers the cause to this and set out to stop the impostor. After he succeeds, both Arn and Medilia apologize for their behavior and welcome him back.[4][5]