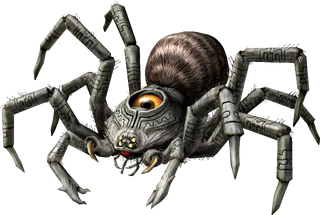 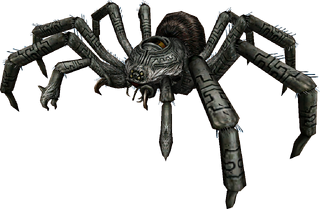 Armogohma is the Boss of the Temple of Time in Twilight Princess.[1]

Armogohma can shoot fiery lasers from its eye. It can also lay dozens of eggs, which hatch into Baby Gohmas. In order to stun Armogohma, Link must shoot its eye with the Bow. Afterwards, Link must bring one of the massive statues in the room to life with the Dominion Rod; doing so allows him to make the statue swing its fist onto Armogohma's carapace. After three hits by the statues, Armogohma's body will implode. Afterwards, Armogohma's eyeball reveals itself to be a small spider on its own, which tries to escape along with some of its spawn. The eyeball can be defeated with a single Sword strike, three Arrow shots, a single Bomb Arrow, or two Spinner attacks. It can also be defeated by using one of the statues controlled by the Dominion Rod, flattening it in the process.

After Armogohma's defeat, Link obtains a Mirror Shard and a Heart Container.

Armogohma's name is a portmanteau of "armor" and "Gohma".