Zelda Wiki
Register
Don't have an account?
Sign In
Advertisement
in: Beaches, East Necluda, Locations, Locations in Breath of the Wild 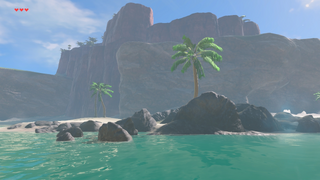 Aris Beach is a location in Breath of the Wild.[1]

Aris Beach is located along the Necluda Sea in East Necluda. It is south of Ubota Point and North Aris Beach.

In Lurelin Village, Link can receive the "Take Back the Sea" Side Quest. Sebasto explains that monsters have taken over many of the Village's best fishing spots, including Aris Beach.[2] Since Link appears tough, he asks him to clear out the monsters.[3]

The Monster Stronghold he is referring to is located just off the eastern coast of Aris Beach. The monsters that inhabit it are Bokoblins, Blue Bokoblins, a Black Bokoblin, and a Blue Moblin. To access it, Link can either swim or take the Raft that can be found on the Clarnet Coast. After all of the monsters have been defeated, Link will be able to access the Stronghold's Treasure Chest, which contains a Knight's Halberd. Sebasto will reward Link with a Silver Rupee for completing his request.[4]

A smaller Monster Stronghold can be found on the western end of Aris Beach, consisting of a Lizalfos and two Blue Lizalfos. The Campfire here has four Boko Spears staked into the ground surrounding it, three of which bear Roasted Bass. The Treasure Chest at this Stronghold contains five Bomb Arrows.

Several other Treasure Chests can be found in the sand and waters surrounding Aris Beach. The contents of these Chests are a Sapphire, two Topazes, a Giant Boomerang, a Soldier's Broadsword, and a Silver Rupee.