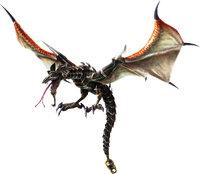 In the story, Argorok first appears at the Palace of Twilight, summoned by Zant to help protect the Gate of Souls. Initially, it flies out of reach, even for the Hookshot, and bombards the allied base with fireballs, its mere presence clearing the Hyrulean Army out of any keep it flies over. To stop the assault, Lana must reclaim the keep beneath Argorok, allowing Midna to create a Magic Circle that she can use to bind Argorok - the dragon quickly breaks free, but the strain forces it to fall back for a while. After thwarting Argorok twice, Lana must secure the Fairy Fountain and enlist the Great Fairy's help in bringing the dragon down long enough to be fought normally.

Retrieved from "https://zelda.fandom.com/wiki/Argorok?oldid=461984"
Community content is available under CC-BY-SA unless otherwise noted.