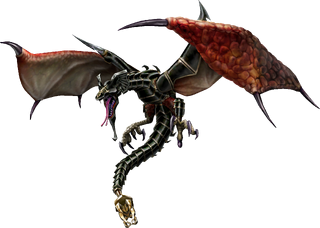 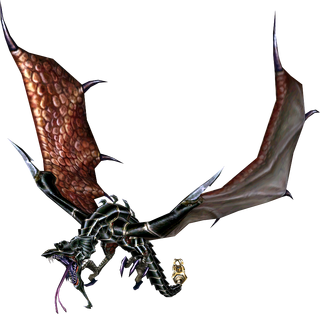 Argorok is a recurring Boss in The Legend of Zelda series.[1][note 1] It is a red-orange wyvern covered in black armor, and it terrorizes the Oocca and wreaks havoc on the City in the Sky.[citation needed] As Link explores the City, Argorok can be seen flying overhead in the sky.

The battle takes place at the highest point in the dungeon, a flat plain with four steel grated pillars and very strong winds. Argorok will primary attack by swooping down at Link to deal damage, Link must go to one of the pillars surrounding the field and climb to the middle of one of the pillars using the Double Clawshots. Link should not stand on the pillars for too long. If he does, Argorok will fly to Link's position and spew out fire at point-blank range, dealing damage. Once on a pillar, Link must wait until Argorok flies up to him and exposes his tail, which Link must target with the Clawshot. Once he has a hold of it, he must equip the Iron Boots to send Argorok crashing to the ground, destroying some of its armor. After this is done twice, the rest of the armor will break away and reveal a new weak spot on his back. At this point, Peahats burst from the ground to serve as extra Clawshot points, and Argorok will remove the rest of his armor. Link must climb to the top of the pillars and use the Peahats to Clawshot his way around the area as Argorok breathes fire at him. Once Argorok pauses, Link must make his way around to its back and jump to the new weak point with the Clawshot. Link must then slash it with the Sword as the boss falls, eventually depositing him on the ground again. After this strategy is used twice, Argorok changes directions. This process must be repeated until Argorok is defeated.

Once Argorok has been defeated, Link receives the final Mirror Shard and a Heart Container.

In Hyrule Warriors, Argorok appears as a giant boss that is encountered in several Legend Mode and Adventure Mode stages. In Legend Mode, it appears in "The Shadow King" and two in "Liberation of the Triforce".

During battle, Argorok stays in flight, making it unreachable by most attacks. It attacks by charging, kicking up whirlwinds with its wings, and breathing a stream of fire that also surrounds it. While creating whirlwinds, the tip of its tail glows blue, making it vulnerable to the Hookshot, which will latch on and pull Argorok down, revealing its Weak Point Gauge. The Hookshot can also be used while it is breathing fire, but only when its tail is glowing blue, otherwise, the flames will burn the Warrior attempting it.

In "The Shadow King," Argorok has a unique strategy as it first appears too high in flight for the Hookshot to reach. It appears at different times, where it takes over a Keep it flies over while attacking the Allied Base with fire balls. Either Lana or Midna must be escorted to these Keeps to create a Magic Circle, which upon activation, summons chains that wrap around Argorok. However, it breaks free and temporarily retreats before appearing again shortly thereafter. When the Great Fairy is summoned later in the battle, she pulls the Moon down and slams it into Argorok, which knocks it down, where it can be fought normally.

Argorok is a play on "Argo", an archaic term for the Ancient Greeks, whose architecture the City in the Sky resembles, and "rok", a term used in the series for dragon enemies. It may also be a play on Kargarok, a similar, more common enemy that resembles a bird.