This article is about the Dungeon in Twilight Princess. For the location in Breath of the Wild, see Arbiter's Grounds. 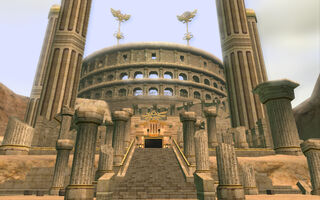 Entrance to the Grounds

The Arbiter's Grounds is located at the far end of the Gerudo Desert. Link reaches the dungeon after infiltrating the Bulblin Camp and battling King Bulblin. The entrance to the grounds itself is uninhabited, except for an Imp Poe that appears at night on one side of it.

The Arbiter's Grounds was a prison built to house Hyrule's most ruthless criminals while they awaited trial, execution, or exile to the Twilight Realm.[1] It is connected to the Spirit Temple from Ocarina of Time,[2] both containing a statue of a woman wrapped in a snake. The Mirror Chamber, home of an ancient relic known as the Mirror of Twilight, stands atop the ruins of the Arbiter's Grounds, where the sacred council of the Sages presides over the cursed grounds, conducting trials and executions of convicted criminals. Its appearance from afar resembles the Roman Colosseum, but inside it resembles an Egyptian tomb.

The dungeon contains four floors and two basements. The first section of the dungeon is very similar to the Forest Temple in Ocarina of Time, as it requires tracking down and destroying four unique Poes in order to light four torches and proceed into the inner sanctums of the prison. Link must transform into his wolf form to follow the Scent of the Poes' essence, which helps him seek them out. After destroying each Poe, one of the four torches in the main room will be lit; once all four torches are lit, a door leading deeper into the prison will open and Link will be able to advance to the second part of the dungeon, where new and different types of obstacles await him, including metallic rails that can give Link a ride once he obtains the ancient device known as the Spinner.

The Arbiter's Grounds teems with the undead. Its halls are haunted by vengeful wraiths, from Stalfos and Stalchild to Gibdos and Bubbles, and even the occasional pack of Ghoul Rats. Link also encounters swarms of Poison Mites, which threaten to slow him down and pull him under the pits of quicksand that cover the dungeon. The Spinner is protected by the dungeon's mini-boss, Death Sword, a vengeful spirit that haunts the sword it once wielded in life. In addition to riding rails to access otherwise inaccessible areas, the Spinner is also necessary to spin certain gears to open new pathways in the dungeon.

Deep within the Arbiter's Grounds lies the remains of a fierce beast, Stallord. Its skeleton is reanimated when Zant unexpectedly appears and stabs the Scimitar of Twilight through the creature's skull. Link is able to defeat it by using a combination of the Spinner and the Master Sword. After clearing the dungeon, Link will be able to progress to the Mirror Chamber outside, where the Mirror of Twilight is found.

In Link's Crossbow Training, the Arbiter's Grounds set the stage for two of the game's stages. The first in Stage 1, which is played as a Ranger level. Link can freely roam the area to destroy the 25 Bulblins during the set time allotment. This task takes place outside of the dungeon in a network of fences, towers, gates, and ruined stone walls. The Bulblins wielding clubs will rush towards Link, although they are not much of a threat, as one shot eliminates them. Bulblin archers can be found mostly in higher vantage points along walls and in towers.

The second occurrence in Stage 7 is actually set inside a hallway of the dungeon. The targets rotate in and out of range from the ceiling in the first scene. The second moves targets along the Spinner rails towards Link. The final area normally encountered is immediately before a doorway and Gibdos constantly rise from the sand. An alternative end scene can be unlocked by shooting the Scarecrows eight times and bursting the head for 1000 points in the first two scenes. This ends the stage at the opposite end of the chamber's hall facing a wall. No Gibdos will appear, but several targets and bonus gold colored targets will fill the screen.

In Hyrule Warriors, the Arbiter's Grounds appear in the Gerudo Desert stage, although it is much smaller, being reduced to three halls and two Keeps. It sometimes serves as the headquarters of Forces in various maps of Adventure Mode and Legend Mode.

The word "arbiter" is another word for a judge or a mediator, an authorized person who makes and passes judgment to settle conflicts.