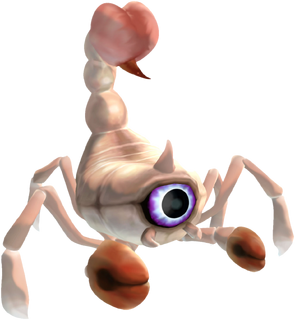 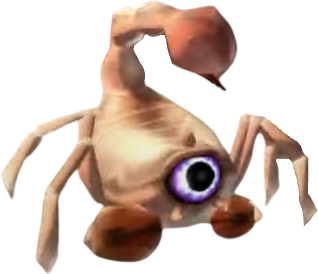 Arachas are small, one-eyed infantile Moldaraches. Arachas that have lived for a millennium grow into Moldaraches, which are also known as "Thousand-Year Arachnids".[2]

Arachas inhabit the deserts of the Lanayru Province. They can be found on the floors of caves and dungeons, in piles of sand when dispersed by the Gust Bellows, and clinging to climbable walls similarly to Skullwalltulas. They also sometimes appear on ceilings, attempting to drop onto Link when he walks underneath. They attack by flinging themselves at Link, attacking him while they cling onto him until they are thrown off. They can be easily killed with a swipe of the Sword or with any projectile, including Slingshot pellets, the Beetle, and the Bow. One blast from the Gust Bellows will knock them over and away from Link, although they will right themselves quickly.

Being physically weak, they become more threatening only when they appear in large numbers, in which they can swarm around Link and latch onto him, attacking as a group. It is still unlikely, however, that they will cause much danger even in these situations.

Large swarms of Arachas are also encountered when battling Moldaraches.