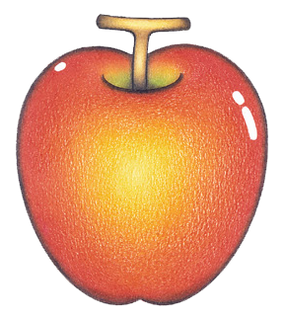 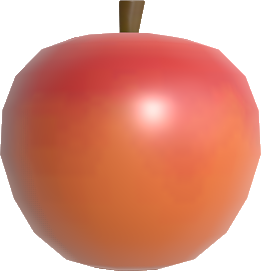 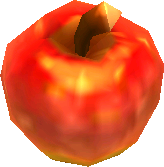 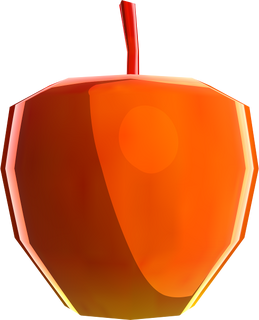 Breath of the Wild
3 Rupees

In Link's Awakening for Nintendo Switch, Apples are found growing on certain Trees scattered on the Overworld of Koholint Island. Link can perform a Dash Attack into these Trees to make them fall on the ground. He can then pick them up and eat them to restore some Hearts.[how many?]

In Twilight Princess, Apples are found in the stalls of Hyrule Castle Town's South Road. However, Link cannot actually obtain or use them.

In A Link Between Worlds, Apples can recover one Heart. They can also be stored in Bottles by catching them with the Net. Next to Link's House, an Apple tree grows Apples with every StreetPass encounter, starting with three and reaching a maximum of 20.

In Breath of the Wild, Apples are Materials that can be used in Cooking Food. This red fruit can be found growing on various trees throughout Hyrule.[2] They're also sold by the General Shoppe and the travelling Merchant Gartan near Gerudo Town. Regular Hinox also drop Apples when defeated.

Apples can be eaten fresh to heal half of a Heart. They can also be made into Baked Apples by exposing them to Fire,[2] which heal three-quarters of a Heart.[3][4] At the Kochi Dye Shop, Apples can be used to create Red Dye.

During the Side Quest "Riddles of Hyrule", Walton will ask Link to bring him something small, red, round, and sweet.[5] If Link drops an Apple on the leaf in front of Walton, he will cheer before moving on to the next riddle.[6]

Apples are either required or an option when Cooking the following meals:

The fifth puzzle in the How to Play Picross series depicts an Apple.

In Hyrule Warriors: Age of Calamity, apples do not appear physically. However, there is the icon of an apple, which can be used to heal several hearts. Although the character can only hold three apples at first, as the character progresses, he will be able to hold 4 apples. There are also baked apples, which can be obtained after burning the character. For example, if the character gets burned by a Bomb Barrel, the apples will become baked, and heal more hearts.