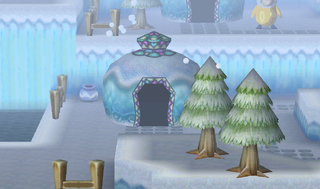 The Anouki Village is a location in Spirit Tracks.[1] It is the home settlement of the Anouki tribe, located in the northwestern quadrant of the re-established Hyrule known as the Snow Realm.

The village, made up of many small huts mostly composed of ice and snow, is one of the most visible areas of activity when Link enters the Snow Realm since it is located immediately south of the Snow Sanctuary. The village is presided over by the chief of the Anouki, Honcho. Overall, there are six members of the Anouki tribe inhabiting the village including Honcho. According to one Anouki, they settled the Anouki Village after they were told that they couldn't live on the Isle of Frost forever.[2] Located almost in the middle of the village is a Air Stone that can teach the young hero the Song of Discovery. There is also a Stamp Station to the east of the village, hidden behind some trees, where Link can receive a stamp from it for his Stamp Book.

Link arrives in the village shortly after recovering the Snow Rail Map from the Tower of Spirits and restoring just enough of the lost Spirit Tracks of the Snow Realm to reach the village.

Upon arriving, Link finds the Anouki tribe in disarray due to recent monster activity near the village.[3] When the young hero meets Honcho, he mentions that he is too busy to help Link since he is setting up a village watch; however, if Link can stay and help him find a patrol partner for every Anouki in the village, Honcho will tell the young hero everything he knows about the Snow Sanctuary.[4] Before departing, Honcho warns Link that the Anoukis are extremely picky when it comes to who they want as partners, and so his job is to acquiesce to each of the Anouki's preferences in order to successfully pull them all together.[5] After accomplishing this, Link must show his findings to the village chief, who will reward the young hero with the knowledge of how to reach the Snow Sanctuary.[6]

A Goron from Goron Village wishes to experience cold weather and snow. Link can bring him here and he will reward the young hero with a Force Gem. Also, by providing lumber from Whittleton and bringing the bridge worker to build a fence, an Anouki will give Link another Force Gem. Both of these Force Gems reveal new Spirit Tracks in the Snow Realm.