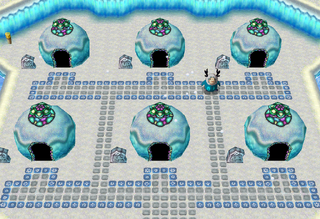 The Anouki Estates is a location in Phantom Hourglass.[1]

The Anouki Estates is six fancy houses on the northern side of the Isle of Frost. The Island Chief of the Anouki tells Link that, some time before he arrived, one of the Anouki living in the estates was kidnapped by a Yook, who are rivals of the Anouki,[2] and that the Yook was now living in the Estates disguised as the missing Anouki.[3] By means of an inquiry, Link must discover which Anouki is an impostor using this rule: the Anouki always tell the truth and the Yook always lie.[4]

The houses are lined up in two rows of three, with Dobo, Kumu, and Fofo living in the front three houses, and Gumo, Aroo, and Mazo living in the back three. Each of the Anouki living in the Anouki Estates will tell Link something about one of the other residents as he attempts to solve the mystery. In addition to the Anouki staying in their houses, Link can also get hints from an Anouki wandering around the Estates named Hintobo, but at the price of 100 Rupees.

The residents of the Anouki Estates will give Link the following information:

Kumu: Either Mazo or Aroo is the liar.[6]

Gumo: Either Fofo or Aroo is lying.[8]

Hintobo: The guys who say that others are honest won't lie. The liar will accuse others of lying.[11]