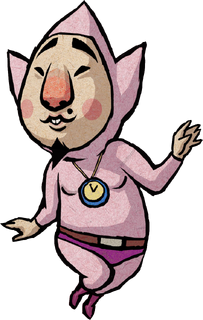 Ankle is a recurring character in The Legend of Zelda series.[3]

Ankle resides at the top of Tingle Tower in The Wind Waker. Ankle considers his twin brother Knuckle to be lazy and good-for-nothing, and was taught how to decipher Maps by his older brother, Tingle.[1] He helps David Jr. to spin Tingle Tower. He initially mistakes Link for Tingle, saying that he was very worried about him.[4] The only time he feels he can truly be himself is when he's tending to the flower garden on Tingle Island. His favorite proverb is One may as well hang for a stolen sheep as for a stolen lamb.[5] Unlike Tingle, he wears pink and the mole on his face is above his mouth rather than below it. In addition, the rosy patches on his cheeks are completely filled in.

Ankle worries about Knuckle and his whereabouts.[8] When spoken to afterwards, Ankle will tell Link how many Kinstone Pieces he has left to Fuse.[9] He, along with the rest of his brothers, believes that Fusing Kinstone Pieces will help him meet Fairies.[10]