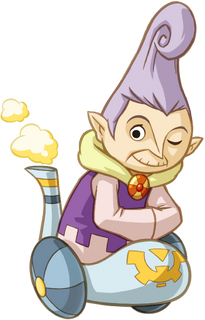 Master[1]
Protector of the Tower of Spirits[citation needed]

Anjean (pronounced /ænˈdʒiːn/, an-JEEN)[citation needed] is a character in Spirit Tracks.[3] She is a member of the Lokomo people and the protector of the Tower of Spirits, the central hub of the Spirit Tracks, whose goal is to prevent the evil Malladus from breaking free of his imprisonment.[4] Anjean provides the Spirit Train, which Link and Princess Zelda use along their quest. Anjean was also a very close friend with Tetra after she met her shortly after the feisty pirate arrived to the land that would become the next Hyrule.[5] As a result of their strong friendship, Anjean gave Tetra the sacred instrument known as the Spirit Flute, but only under the condition that she and her descendants would use it to protect the land.[6]

As the guardian of the Tower of Spirits, Anjean plays a major role, providing both Link and Princess Zelda with helpful advice on how to help restore the Spirit Tracks and destroy Malladus, once and for all. She also supplies most of the background information about the Lokomo, the Spirit Flute, and the Spirit Tracks. One of Anjean's most notable abilities is her skill to telepathically communicate with others, which she does frequently to aid the young heroes in their quest.

After Link and Princess Zelda retrieve the Fire Rail Map from the Tower of Spirits, they are confronted by Byrne, and just as he is about to attack them, Anjean shows up and stops him.[13] As Anjean affronts Byrne, it is revealed that he used to be her apprentice, but left her teachings once he found out that the Spirits of Good would never provide him with any more power, thus pushing him towards joining in the resurrection of Malladus. Anjean, ashamed of his recent actions since the Spirits of Good sent them to protect the land, calls him an "unworthy apprentice," for no matter how many times she corrected his behavior, he would never listen to her.[14] After Byrne explains his reasoning behind his actions, Anjean gives up hope in convincing him otherwise and urges Link and Princess Zelda to hurry to the Fire Temple, warping them to the entrance of the Tower of Spirits while she ensues in combat against Byrne.[15]

Once Malladus is resurrected and escapes with Cole to the Dark Realm using the Demon Train, Anjean appears again, seemingly unharmed from her battle with Byrne, although she mentions she was not able to best him since he had gotten stronger.[16] Princess Zelda then asks her if there is a way to force Malladus out of her body, and Anjean mentions that the Bow of Light, which was used in the War between the Spirits of Good and Malladus, could drive his spirit out from Princess Zelda's body.[17] To reach the Sand Temple, the location of the Bow of Light, she gives them a Force Gem, revealing the Spirit Tracks to the Sand Sanctuary, sending them to their next task.

With the Bow of Light in hand, Link and Princess Zelda return to Anjean, and although Anjean tried to find where Malladus and Cole had gone to, she could not pinpoint their exact location.[18] Byrne, who had been left in the care of Anjean after he was betrayed and injured by Malladus and Cole, tells them to find the Compass of Light beneath the altar in the Tower of Spirits, which reveals the location of the Demon Train within the Dark Realm.[19] Before Link departs to find the Compass of Light, Anjean gives him the Lokomo Sword.[20] Although only Spirits had wielded it before, she entrusts it to him, saying that he is the one meant to wield it.[21]

After the defeat of the Demon Train, Anjean wishes to accompany Link and Princess Zelda on their battle against Malladus.[22] However, since her wounds from her battle against Byrne are still fresh, Princess Zelda urges her to rest, for she and Link will face Malladus alone.[23][24] At the least, Anjean provides Princess Zelda a Phantom to aid Link in their upcoming battle. She then blesses them and tells them to go forward with caution.[25]

Anjean appears as a Trophy in Super Smash Bros. for Nintendo 3DS.

Anjean's name might be a reference to an engine, particularly a train engine.